South Africa, who are currently in Bangladesh for a full series, began their tour with a warm-up T20 tie against BCB XI at the Khan Shaheb Osman Ali Stadium in Fatullah on Friday, and were off to start on a positive note as they won the encounter by eight wickets and registered a comprehensive win to the tour starter.

Earlier, BCB XI skipper, Imrul Kayes won the toss and elected to bat first. However, they were off to an extremely shaky start as they lost their openers in the form of Rony Talukdar and Anamul Haque for one and three, within the powerplay phase of the opening six overs and were three down within 10 overs, with Shykat Ali the man being dismissed for mere five.

The phase post 10 overs was even pathetic for BCB XI as they were only able to bat for eight over since then and lost their remaining seven wickets for just 49 runs. Skipper, Imrul Kayes was the only highest scorer with 29 runs, followed by Shuvagata Hom for 18 and Sohag Gazi for 13. While the rest of the batsmen were dismissed for a single figure, as David Wiese claimed three for 13 from just three overs.

During the chase, it was openers, Quinton de Kock and AB de Villiers, who were off to a solid start and they batted comfortably until the seventh over as they retired themselves out for 35 and 25, respectively. JP Duminy and David Miller were in next and comfortably chased they total down in 12 overs as they contributed 17 and 20, respectively, thus winning by eight wickets on a positive note. 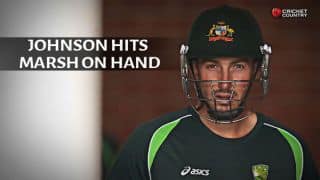