JP Duminy and AB de Villiers scored the bulk of the runs for the hosts.

South Africa’s first innings finally came to an end, as they were all out for 423 on Day Two of the second Test against Australia at Port Elizabeth.

Nathan Lyon, who has been their most successful bowler in this Test took five wickets, including all the important ones of Faf du Plessis, Dean Elgar, AB de Villiers and JP Duminy, who departed for a well made 123 off 231 balls.

Lyon, in fact now has second most five-wicket hauls among all Australian off-spinners who have played Test cricket for the country. He has five, compared to six by Hugh Trumble, Ashley Mallett, Joes Palmer and Bruce Yardley.

Duminy and de Villiers propelled South Africa’s score past 300, after which de Villiers departed for a fine century, but Duminy carried on and pushed their total past 400. Their tailenders didn’t last long, as the innings came to an end at 423.

It will be interesting to see how Australia bat for the remainder of the day, as the fresh South African pacemen will be raring to go all out against them. 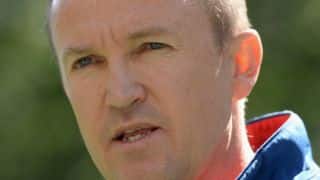