The judge, Mr Justice Cooke, delivered his sentence on the spot-fixing case at Southwark crown court this morning. Mohammad Asif was jailed for one year for his role in the case. 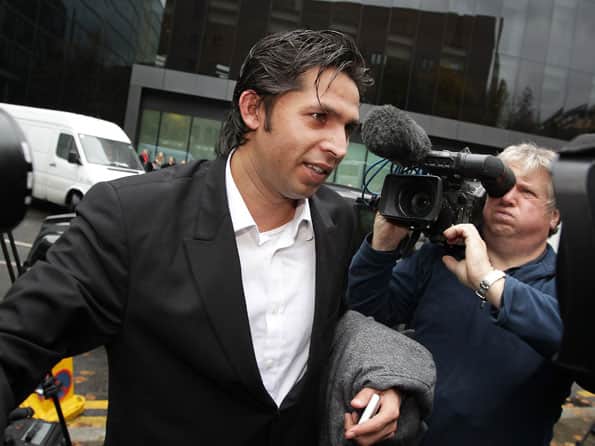 The judge, Mr Justice Cooke, delivered his sentence on the spot-fixing case at Southwark crown court this morning. Mohammad Asif was jailed for one year for his role in the case.

Asif was sentenced to jail after being found guilty of spot-fixing, making him, along with Salman Butt and Mohammad Aamer, the first cricketers ever to be imprisoned for corruption.

On February 5th, 2011 a 3-man tribunal, appointed by the International Cricket Council (ICC) gave the verdict that he was to be banned for 7 years, with 2 of those suspended if no further offences were committed. This after News of the World exposed them of deliberately bowling no-balls in return for payment from a betting syndicate.

29. You have been convicted of the same 2 offences as your captain Salman Butt. You do not have the benefit of a plea but your culpability is less than his, both because of his key role as captain and orchestrator along with Majeed and because your participation in this conspiracy was limited to the bowling of one no ball.

30. Whilst no marked NOTW money was found in your possession, the jury have found that you conspired to accept money in the same way as your captain. You bowled a no ball in order to obtain payment and in order to assist others to cheat at gambling. If it was 10,000 for a no ball, you would have got a share of that sum, allowing for a cut for Salman Butt and Majeed. The sums of money of which others could have been defrauded, for the reasons I have already given cannot be accurately calculated.

31. There is no evidence of any prior involvement on your part in such activities but it is clear that Majeed had every confidence in you playing your part when identifying the no ball that you would bowl on the 26th August. It is hard to see how this could be an isolated occurrence for you either.

32. I sentence you in respect of your agreement to bowl that no ball, again bearing in mind all the factors I have mentioned before in sentencing today.

33. I take account of all that is said on your behalf and in particular I bear in mind the 7 year ICC ban imposed last year, of which 2 years are suspended, and its effect on your career as a fast bowler now aged 28, which means that your cricketing career is effectively over. This in itself is a considerable punishment for a man in your position. This enables me to take a more lenient course, than I otherwise might. That is the punishment imposed by the cricket authorities but these crimes of which you have been convicted require that a sentence be imposed which marks them for what they are and acts as a deterrent for any future cricketers who may be tempted.

34. In your case there will be concurrent sentences of 1 year s imprisonment on each count.