South Africa rugby team had all praise for the South African cricket team, who registered a thumping 214-run win over India in the fifth and final One-Day International (ODI).

The South Africa rugby team had all praise for the South African cricket team, who registered a thumping 214-run win over India in the fifth and final One-Day International (ODI) at the Wankhede Stadium in Mumbai on Sunday, and also clinched the five-match ODI series 3-2, registering their first-ever bilateral series win in India. The rugby team, who is currently playing the Rugby World Cup is in the semi-finals and is due to face the defending champions New Zealand, while South Africa are amidst enjoying their victory over India and would soon get down to prepare for the upcoming four-match Test series against India. Full Cricket Scorecard: India vs South Africa 2015, 5th ODI at Mumbai

Kagiso Rabada and Dale Steyn continued the good work started by Quinton de Kock, Faf du Plessis, and AB de Villiers as South Africa trounced India by 214 runs to win the fifth One-Day International (ODI) at Wankhede Stadium, Mumbai, on Sunday. With the series level 2-2 before the match, it was essentially a final and South Africa brought their A-Game when it mattered the most. India suffered the brunt of their toothless bowling attack and the brilliance of South Africa’s batting might as the Proteas piled on 438 for 4, the highest ODI score ever recorded in India. In the process, South Africa won their first ever ODI series in India. AB de Villiers: Faf du Plessis’ ton did not get enough credit

Meanwhile, inspite of blasting a 61-ball 119 in the fifth and final ODI against India, South African skipper AB De Villiers has played down his effort in comparison to teammate Faf du Plessis‘s more sedate 133, saying the knock helped other batsmen free up, reports PTI.

Well done to our boys in India. Great series win helps to ease the pain a bit here in England @OfficialCSA #proteafire #proudlysouthafrican

Faf did not get enough credit for his knock. He came in at a very difficult situation, in the middle of the innings, when Indian spinners started dominating a bit. He controlled the innings exceptionally very well. It allowed [third centurion in innings] Quinton [de Kock] and me to, sort of, free up,” said de Villiers in the post-match conference at the Wankhede Stadium on Sunday, reports PTI. 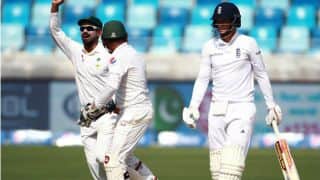