Sunrisers Hyderabad were 36 for no loss after five overs against Kolkata Knight Riders (KKR), in the 19th match.

At the crease were opening batsmen David Warner and Shikhar Dhawan, batting on 22 and 23 respectively. Sunrisers were off to cautious start as Shikhar Dhawan and David Warner did not look to score quick runs in the initial overs, but picked up soon after getting their eye in. LIVE CRICKET SCORECARD AND COMMENTARY: Sunrisers Hyderabad (SRH) vs Kolkata Knight Riders (KKR) in IPL 2015 match 19

Warner smashed the first four for his side Sunrisers Hyderabad when he tucked one short and on the pads past the man at fine leg off Morne Morkel in the second over. The second boundary then came in the next over when Warner danced down the wicket to hit Johan Botha over extra cover for four.

Warner continued to attack Morkel as the penultimate ball of the over was whacked for a flat hit — which fell right next to the boundary ropes. KKR then introduced Sunil Narine in the fifth over, who too was slammed for a four on midwicket.

Earlier during the toss, Kolkata Knight Riders’ captain Gautam Gambhir won and decided to field in the 19th match of the ongoing IPL 8. KKR made only one change, bringing in Johan Botha in place of Ryan ten Doeschate in their playing eleven. On the other hand, Sunrisers Hyderabad made two changes in their team: Bipul Sharma and Moises Henriques in place of Ashish Reddy and Eoin Morgan. 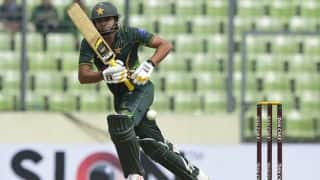