David Warner made his final IPL 2019 appearance count with a blazing 81 off 56 balls to drive Sunrisers Hyderabad to 212/6 against Kings XI Punjab in Match 48 at the Rajiv Gandhi International Stadium on Monday.

David Warner made his final IPL 2019 appearance count with a blazing 81 off 56 balls to drive Sunrisers Hyderabad to 212/6 against Kings XI Punjab in Match 48 at the Rajiv Gandhi International Stadium on Monday.

Warner and new his new opening partner Wriddhiman Saha combined to scored 77 runs in the first six over, and then in association with Manish Pandey, Warner added 82 runs in under ten overs, to put SRH in a formidable position. Bur Warner’s departure, in the 16th over, taken by KXIP skipper Ravichandran Ashwin, dented SRH as they the visitors reined things in a bit in the death overs. SRH managed to score 53 runs in the last five overs, losing five wickets in the process.

For KXIP, Ashwin picked two wickets in an over removing Pandey for 36 off 25 balls and then Warner, caught by Mujeeb ur Rahman. Murugan Ashwin returned 4-0-32-1. Mujeeb leaked 66 runs in his four overs.

Warner sizzles in the middle overs

Earlier, Warner scored his eighth fifty of IPL 2019 and his ninth 50 plus score to drive SRH to a formidable position of 134/1 in 13 overs, when the 2nd strategic time-out.

After Warner and his new opening partner Saha – the man with hundred in an IPL final – tore in the sloppy KXIP bowling unit, blazing away to 77/0 in the powerplay overs, Saha was removed by Murugan , caught behind for 28 off 12 balls.

But in company of Pandey, Warner continued to motor along hitting five fours and two sixes en route to an unbeaten 63 off 45 balls, while Pandey is not out on 28 off 20 balls. Pandey was given a reprieve in the 12th over when KXIP skipper Ashwin dropped a sharp chance at mid-off when he was on 20.

Earlier, Arshdeep Singh started well to Warner with a yorker first up followed by two dots, but he drifted in line twice and was punishes with Warner taking two fours towards fine leg as nine runs came of the first over. Mujeeb ur Rahman, in for this game, was hit for the first six off the match over long-on as 13 runs came off the second over. (SRH vs KXIP: LIVE SCORE)

Saha, bumped up the order also, had fluent start as he took on the young Arshdeep over mid-on for a four and then god a bye that went four with debutant Prabhsimran Singh, caught by the awkward bounce off a slower one. 15 runs came off the over.(SRH vs KXIP: LIVE BLOG)

Mujeeb’s second was also taken for runs with Warmer finding the fence twice and Saha once as 18 runs off the over came and the team up was up in the four over. (SRH vs KXIP: Toss Report)

Saha stuck into Mohammad Shami’s first over with a four and a six after Shami first four balls had yielded just three runs. 13 runs came off it. Ashwin was greeted with a six first ball by Warner, a slog sweep behind square, but gave five singles thereafter. 11 runs came off it as Warner ended the powerplay on 37 off 24 balls while Saha raced to 28 off just 12 balls. 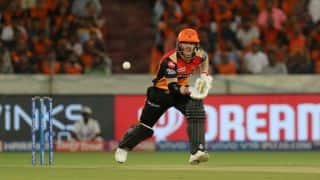 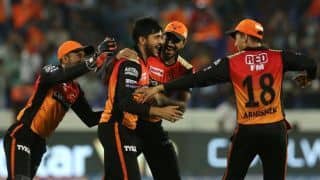