Kings XI Punajb skipper Ravichandran Ashwin won the toss and elected to bowl first against Sunrisers Hyderabad in Match 48 of IPL 2019 at the Rajiv Gandhi International Stadium, Hyderabad on Monday.

Kings XI Punjab skipper Ravichandran Ashwin won the toss and elected to bowl first against Sunrisers Hyderabad in Match 48 of IPL 2019 at the Rajiv Gandhi International Stadium, Hyderabad on Monday.

Three changes for both the teams as Abhishek Sharma, Shandeep Sharma and Mohammad Nabi back in the 11 for SRH while for KXP Prabhsimran Singh makes his debut and Mujeeb ur Rahman is back.

Williamson: We would have bowled first as well. As Ash said, looks a good wicket that won’t change much but can’t do much now. He’s (Warner) been outstanding all season but as a batting unit collectively, we need to do well. As Ash said, it’s business time of the season and everyone is looking for points but also need to express themselves. Three changes – Abhishek, Nabi and Sandeep come in

Ashwin: Looks like a good deck, doesn’t look it will change much. We’re gonna bowl first. It’s important to start afresh, we have had a good break. There were some close games and we could have ended on the right side of it but that’s how the format is, that’s how the IPL is. It’s an emotional roller-coaster ride. We also have three changes – PrabhSimran Singh makes his debut and Mujeeb is also back. One more change that I can’t quite remember. He (PrabhSimran) is a fine talent from U19s and we hope he can express himself

oth teams are struggling for momentum in IPL 2019, with SRH placed at fourth place on the points table after a series of losses and KXIP at sixth after losing four of their last five matches. Both teams have 10 points.

Game 48 of the tournament is David Warner s last match of the league and you can expect him to go out on a high. 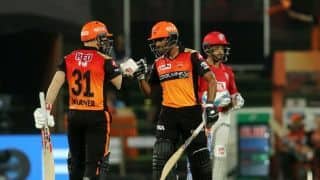