Mahela Jayawardene is unbeaten on 53.

Mahela Jayawardene‘s unbeaten fifty helped Sri Lanka post 115 for three at Lunch against South Africa in the second Test at Colombo. There is a sense of inevitability when Jayawardene walks out to bat at the Sinhalese Sports Club (SCC). In a session that saw Sri Lanka lose two wickets early, Jayawardene walked out at his favourite ground to lift Sri Lanka out of the muddle. He reached his fifty off only 58 balls and took Sri Lanka to a decent spot at lunch. They did lose Kaushal Silva just before lunch, but it has been a session where both sides have shared the honours.

Sri Lanka won the toss and chose to bat first at SCC. Upul Tharanga and Silva started off and initially, they were slow as Dale Steyn bowled well. In the fifth over, Steyn struck as he surprised Tharanga with a short ball. Tharanga tried to get out of the way, but the ball took his glove and went to the wicketkeeper. Off the next ball, Kumar Sangakkara, the man in form, was dismissed as he tried to pull a short ball and was caught at square-leg.

With those twin strikes, South Africa were well and truly on top. But Jayawardene walked out and played a handsome innings. There were those typical flicks through the leg-side as he raced away to his fifty. Meanwhile, Silva also moved well as he played a few good strokes off the spinners. Jayawardene also attacked the spinners and the momentum seemed to shift. However, at the stroke of lunch, Silva edged one off JP Duminy and was caught brilliantly at slip. 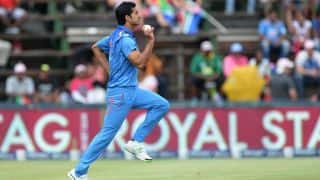 India A tour of Australia 2014: National Performance Squad set India A target of 218