Jayawardene looked rusty at the start, but got more fluent with time.

Sri Lanka managed to accumulate a handy lead of 106 runs at stumps on Day three after bowling out England for 365. The Lankans put on a spirited fightback after conceding a 112-run lead. The visitors where cruising with their key player Kumar Sangakkara and Mahela Jayawardene keeping England bowlers at bay, but Moeen Ali’s two wickets in three balls towards the end gave England some hope with a new ball due in seven overs on the fourth day. The Lankans are 214 for four with Jayawardene unbeaten on 55.

It was a day when the Lankans had to get all their cards right after being bundled out for 252 on the first day. They had already made early inroads late on the second day and their skipper Angelo Mathews lead from the front packing England out for 365 – 45 more than they were at stumps. Mathews picked all the two and Shaminda Eranga bagged the other two.

A 112-run lead looked good enough for England pacers with the movement on offer for their Lankan counterparts. But the Lankans once again put up strong resistance. Kaushal Silva and Diumuth Karunaratne batted for just above 20 overs which meant that they had managed to see of the swing threat from James Anderson and Stuart Broad. It was Liam Plunkett who found the first breakthrough luring Silva into a drive and having him caught behind for 13. Karunaratne and Sangakkara then rallied Lanka ahead comfortably before the former was unlucky to be caught down the leg-side off Plunkett’s bowling.

From thereon, it was a battle between the old warhorses and the England bowlers. Kumar Sangakkara, in his sublime touch, along with Mahela Jayawardene frustrated the opposition. The closest England came to finding the breakthrough was that of Jayawardene. He was tested with a few short balls and almost gloved once off Broad’s bowling. Meanwhile, Sangakkara was moving from strength to strength. He surpassed Jacques Kallis to become the third highest sorer of all time and also achieved a world record of seven Test fifties in a row (previously achieved only by Everton Weekes, Andy Flower and Shivnarine Chanderpaul).

After trying out all options, Alastair Cook finally thought it sensible to try out Moeen Ali – the only spin option they’ve had this series. To Cook’s delight, Moeen struck in his third over removing Sangakkara leg-before for 55. It also meant that all of Moeen’s Test wickets were of Sangakkara having removed him at Lord’s as well. The bonus wicket followed in his next over as Lahiru Thirimanne bagged a king pair, bowled by one that spun away from his bat. Amongst Lankans, only Rangana Herath had bagged a king pair in tests.

Plunkett almost got the wicket of Jayawardene when he bowled a straight yorker, but umpire’s decision against the bowling side meant that the ball brushing the stumps was not enough for a wicket on referral. Jayawardene hung on to get t his 48th fifty and steered the innings with skipper Mathews. Jayawardene looked rusty at the start but as he faced more and more deliveries, the foot movement got more fluent and the strokes were neatly timed.

The two remained unbeaten at stumps as  England look to change the fortunes with new ball tomorrow. Najam Sethi hopes for bilateral series between India and Pakistan 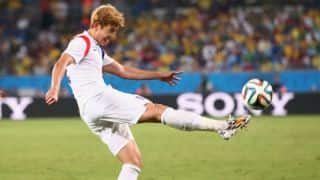