Sri Lanka won by 87 runs to square the series.

South Africa lost to Sri Lanka by a huge total of 87 runs in the second One-Day International (ODI) of their series, thereby squaring the series 1-1. Hashim Amla scored his second consecutive — and 14th overall — ODI ton, but it was a lone effort as almost none of the other batsmen managed to score runs against an attack that was supremely confident despite a loss in the last game.

South Africa were in trouble at 129 for seven after 30 overs. A 53-run alliance between Dale Steyn and Amla helped the Proteas recover, but the match was over soon after, as Amla was dismissed for 101. South Africa could not score another run after his dismissal, as they were bowled out for 180.

After AB de Villiers holed out to substitute fielder Thisara Perera for 29, wickets keep falling. At the other end, Amla was virtually impenetrable, as he scored well over 60 percent of the total runs scored by South Africa. Quinton de Kock, Jacques Kallis, JP Duminy, David Miller, Ryan McLaren, and Vernon Philander were all dismissed for single-digit scores.

Earlier, Angelo Mathews and Ashan Priyanjan staged an assault, but Ryan McLaren struck repeatedly at the death in the second One-Day International (ODI) between Sri Lanka and South Africa at Pallekele after Dilshan got Sri Lanka off to a flier early on. Sri Lanka could have got much more than the 267 they finished with, but McLaren took four wickets in seven balls to halt their progress.

Sri Lanka got off to a good start, but Dale Steyn injured his hand while fielding off his own bowling, going off the field just 2.2 overs into his spell in the process. Dilshan made his intentions clear very early on, hitting Steyn down the ground for four in the first over of the match. He followed it up with two more boundaries in his next over. 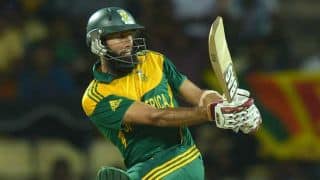