Sri Lanka's Dilruwan Perera stood tall with a five-for on Day 5 of the second Test versus Pakistan.

They often say Test cricket is dying. Out of 35 Tests in 2017, only 3 have been drawn. They never mentioned this. Out of 15 Test series, only 2 have been drawn. Needless to say, this has also been overlooked.

In a two-Test series against Pakistan, Sri Lanka whitewashed them, winning the final Test by 68 runs. In the process, Sri Lanka became the first side to defeat Pakistan in UAE, that is, in a span of 7 years.

Pakistan required 119 runs on the final day, and Sri Lanka were 5 wickets short of an emphatic win. Dilruwan Perera’s five-for, along with Suranga Lakmal and Rangana Herath’s contributions, lifted visitors to a well-fought win. In addition, they also take the No. 6 position in ICC Test rankings. Meanwhile, Pakistan slip to the seventh spot by virtue of a 0-2 scoreline.

Day Five resumed with Pakistan at 198 for 5. Sarfraz Ahmed and Asad Shafiq’s 173-run stand added to Sri Lanka’s woes. Sarfraz’s urgency for runs made the scoreboard ticking, and was well supported by Shafiq’s resolute approach. However, Sarfraz’s free-scoring ways led to his downfall. He went for his patent slog-sweep, got a top edge and was cleanly taken at deep fine-leg. This changed the complexion of the match once again. Sri Lanka got the opening they needed, and pushed Pakistan on the back-foot.

Shafiq struck a gritty hundred and became Pakistan’s only hope after Sarfraz. He lost Mohammad Aamer, trapping him lbw for 4 and triggering collapse. By virtue of Aamer’s departure, Dilruwan registered his fifth five-for and put Lankans on top.

Rangana Herath joined the party and got his first scalp of the innings: Yasir Shah was well outside the crease, eventually getting stumped. Suranga Lakmal removed Shafiq in quick succession. He was getting late movement and managed an edge off the right-hander after the new ball was taken. It was only a matter of time before Pakistan folded for 268. The last wicket was Wahab Riaz. He was in a mood to slog and went for a heave, only to be caught by skipper Dinesh Chandimal.

The Sri Lankans burst into celebrations as the series win came after a long halt. They had a tough time against opponents such as Bangladesh and Zimbabwe, and were whitewashed by India at home.

Earlier, Sri Lanka opted to bat and posted 482 courtesy Dimuth Karunaratne’s 196. In reply, Pakistan managed only 262 as Herath and Dilruwan shared 6 wickets. Nonetheless, the drama wasn’t over. Sri Lanka, with a lead of 220 runs, were reduced to 96 as Riaz and Yasir wrecked havoc. The target was 317. Pakistan had to bat well on a tricky surface in the last two days. They were restricted to 52 for 5 before Sarfraz-Shafiq bailed them out. However, the duo failed to provide the final onslaught, and Sri Lanka pocketed the series 2-0.

– Pakistan have lost their first Test series in UAE since 2010.

– Sri Lanka become the third side to win a Test after bundling out for less than 100 in the 3rd innings. Australia have done it twice.

Man of the Match: “I am really happy with my efforts. I wanted to show more responsibility and it worked. (On any changes in technique) For the seamers, I did change a bit but overall, the game plan was the same. I wanted to be positive, as that’s the way I generally play. I changed my mindset and it worked. It’s been a good time for us on this tour”, Dimuth Karunaratne.

Sarfraz Ahmed: It was a tough series for us and we did come close in both games. However, we didn’t play good cricket and so we didn’t win. Preparation was fine for the red-ball format but we didn’t execute our plans well enough. Credit to them as their bowlers did really well, especially Rangana Herath who is world-class while Dilruwan was also very good. They had an edge in spin department and that worked for them. It’s a new experience, captaining in this format and I am confident of improvement in the next games.

Dinesh Chandimal: We are over the moon. This is a great achievement for us. Credit goes to the boys and the team management for all their practice methods. Also want to credit the selectors for their backing. It was a tough series against India but we learnt a lot from that. I thought we executed really well in this series. (On the energy from SL this series) If you look at the guys, they are really committed and motivated, so the team spirit will come. (If there was any pressure today at the start) Last night, in the last session, it was difficult to bowl with the dew factor which didn’t help the spinners. But, we knew that today in the afternoon, it will grip better as we have quality spinners. Credit to the whole team as they did a great job throughout. 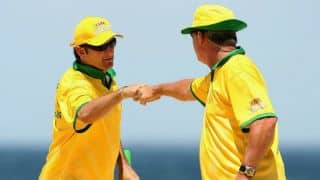