Sri Lanka were bowled out for 188 after 47 overs in the first One-Day International (ODI) against New Zealand at the Hagley Oval in Christchurch on Saturday. Matt Henry was the pick among the New Zealand bowlers with figures of 4 for 49 from 10 overs, while Doug Bracewell took three wickets and Mitchell McClenaghan picked up two wickets for 37 and 40 runs respectively. Sri Lanka would have been bowled out for a score below 100, had it not been for the brave half-centuries by Milinda Siriwardana (66 off 82) and Nuwan Kulasekara (58 off 73), sharing a vital 98-run seventh-wicket partnership between them to rescue their side from a disastrous score of 64 for six. LIVE CRICKET SCORECARD: New Zealand vs Sri Lanka 2015-16, 1st ODI at Christchurch

The New Zealand new-ball pair of Henry and Adam Milne wreaked havoc on Sri Lanka right from the word go after the visitors opted to bat after winning the toss. Danushka Gunathilaka was the first to depart, getting a faint edge off a Milne delivery to opposition wicketkeeper Luke Ronchi, with New Zealand successfully reviewing the umpire’s original decision of not out. It was an all-Henry show thereafter, as he ran through the Sri Lankan top-order, sending vice-captain Lahiru Thirimanne and skipper Angelo Mathews for 1 and 0 off consecutive deliveries in eighth over. He got his fourth wicket by removing Sri Lankan wicketkeeper batsman Dinesh Chandimal, who edged it to the slips to offer Ross Taylor a simple catch and depart for 5.

The Sri Lankans were staring at a situation of getting bowled out for less than 100, with Henry bowling the spell of a lifetime. Middle-order maintstay Siriwardana however, had other plans. The part-time left-arm spinner, who is shaping into a useful all-rounder since making his debut against Pakistan earlier this year, rallied with Kulasekara for the seventh wicket in order to guide his side out of the pressure situation. The duo brought up their half-centuries and added 98 for the seventh wicket. Although they eventually perished in consecutive overs, their efforts helped guide the tourists to a score within the range of 200. 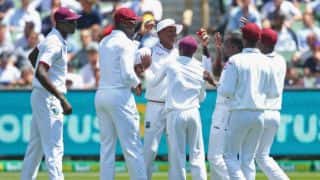