India were finally knocked out of the tri-series as Sri Lanka brought a heart-breaking end to their nervous wait with a nail-biting nine-run victory over Australia in the last over of a must-win contest on Friday. 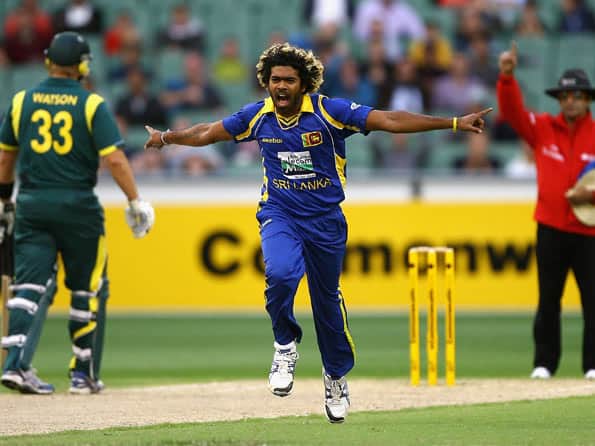 India were finally knocked out of the tri-series as Sri Lanka brought a heart-breaking end to their nervous wait with a nail-biting nine-run victory over Australia in the last over of a must-win contest on Friday.

India needed an Australian win to qualify for the finals but it was Sri Lanka who secured a passage to the summit showdown as they scraped past the hosts in a match which saw fortunes fluctuating from one team to another till the very end at the MCG.

Electing to bat, Sri Lanka put up a modest 238 runs and then bowled out the hosts for 229 to win with five balls to spare.

In then nerve-wrecking final moments of the game, Australia needed 10 runs in the last over off Nuwan Kulasekara but David Hussey’s mighty heave was caught by Tillakaratne Dilshan at long-off to trigger off wild celebrations in the Sri Lankan camp.

Both Australia and Sri Lanka now have 19 points each and will clash in the best of three finals, beginning at Brisbane on Sunday.

India remained on 15 points and it marked the end of the a disastrous tour, in which they suffered a 4-0 Test series whitewash and had mixed results in the tri-series.

The Australian chase was guided well by stand-in skipper Shane Watson, who scored 65 runs, and David Hussey’s fighting 74, but they lacked the fire power in the end to overhaul the modest target.

For Sri Lanka Kumar Sangakkara (64), Dinesh Chandimal (75) and Lahiru Thirimanne (51) were the chief contributors to the total.

Lasith Malinga, who had a horrendous last match against India, was the star performer this time as he picked four wickets including that of Watson, David Warner (6) and Peter Forrest (2).

Australia were reeling at 26 for three — having lost Matthew Wade (9), Warner and Forrest — when Watson and Mike Hussey steadied the chase with a 87-run partnership for the fourth wicket.

The match was looking like going Australia way but Lahiru Thrimanne broke the stand by scalping Hussey (29).

David was playing well from one end but was running out of partners with Watson, Daniel Christian (3) and James Patinson (12) departing early.

David fought hard with his fighting knock and was the last man dismissed. His effort was only enough to reduce the defeat margin.

Earlier, all-rounder Daniel Christian sparkled with a hat-trick during a career-best five-wicket burst as Australia dismissed Sri Lanka for 238.

Playing only his eighth ODI, the 28-year-old Christian’s hat-trick in the 44th over was the highlight of the first session’s play in today’s match — the batsmen falling victim to him being Thisara Perera (5), Sachithra Senanayke (0) and Nuwan Kulasekara (0).

The right-arm pacer ended the day with impressive match figures of 5/31 in nine overs. James Pattinson picked up four wickets, conceding 51 runs in his 10 overs.

Opting to bat first, it was a wobbly start to the proceedings for the islanders as they lost their openers with less than 20 runs on the scoreboard.

Skipper Mahela Jayawardene (5) was the first to head to the dressing room when he was run out by David Hussey in only the second over of the day.

It was Dilshan who called for a very risky single and Jayawardene responded after some hesitation. Hussey, from the second slip, pounced on the ball with one hand and managed a direct hit finding Jayawardene well out out of his crease.

Dilshan didn’t last long either with comeback pacer James Pattinson getting his scalp after the right-hander had contributed merely nine runs to the total.

Dilshan was surprised by a bouncy one that caught him on the backfoot and ended up giving a thin edge through to Matthew Wade behind the stumps. Sri Lanka were reeling at 17/2 at this stage.

But the Lankans started the rebuilding job soon enough with the experienced Sangakkara and the exciting new talent Chandimal joining hands for an entertaining third-wicket partnership of 123.

Sangakkara was perfect foil to the natural aggression of Chandimal as the duo stitched together a crucial stand that resurrected the Lankan innings.

Sangakkara’s knock came off 93 deliveries during which he struck three boundaries before Pattinson induced a top edge off his bat that was caught by Peter Forrest at deep square leg off the final delivery of the 29th over.

But Chandimal held fort for quite some while and even got a life in a bizzare manner during the course of his innings which was studded with three fours and a couple of sixes.

In the 35th over of the innings, Thirimanne pushed for a risky third run off Australian skipper Shane Watson’s bowling.

Ben Hilfenhaus made a sliding effort at the point boundary which caught Chandimal well short of crease but the batsman was saved as TV replays showed that Hilfenhaus’ foot had touched the boundary rope before he threw the ball.

Chandimal was eventually dismissed by Pattinson, caught at mid-off by McKay while trying to strike one down the ground.

Thirimanne held one end with his gritty 59-ball knock that included a couple of boundaries but Sri Lanka needed an acclerator after Chandimal’s dismissal. However, the usually effective Angelo Mathews and Thisara Perera both let the team down.

While Mathews spooned a Christian delivery down the ground which was caught on the run by Xavier Doherty. Perera was dismissed when he was caught by Mike Hussey at the deep midwicket boundary.

Dav Whatmore set to take over as Pakistan coach