Sri Lanka Cricket (SLC) elections have been postponed by two weeks due to a translation error.

Sri Lanka Cricket (SLC) elections have been postponed by two weeks due to a translation error.

SLC elections were to be held on February 2, 2019 but have been postponed on of legal grounds. The change has been necessitated after a translation error from Sinhalese to English.

According to Sri Lankan sports minister Harin Fernando, the English version of the gazette that gives him the right to appoint an advisory committee missed a word.

As per the original document, a retired judge was to head the committee but the word ‘retired’ went missing in the English translation.

“It is because we had to correct the gazette, it was a legal issue,” Fernando was quoted as saying by ESPNcricinfo on Thursday. “I couldn’t appoint a sitting judge. The gazette was done by the previous minister, and according to the Attorney General’s advice we had to change it and give ample time for the new appeal committee to make their considerations.”

The International Cricket Council (ICC) had set the deadline of February 9 for the elections to be conducted. However, after the latest development, the cricket board will miss the deadline meaning they will be asking ICC for an extension.

The elections were originally due in May last year but following a series of court cases they were postponed indefinitely. 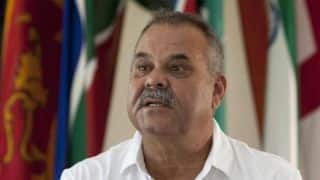