On Day Two of the third Test against India, most of Sri Lanka cricketers, barring the bowler and the wicketkeeper were seen wearing pollution mask as they took field after lunch.

Smog in Delhi had earlier caused many accidents and difficulties. Now, it has compelled the Sri Lankan cricketers to wear masks to safeguard themselves from pollution while fielding. On Day Two of the third Test against India, most of Sri Lanka cricketers, barring the bowler and the wicketkeeper, were seen wearing pollution masks as they took field after lunch. Sri Lanka players, led by Dinesh Chandimal, pleaded to the umpires to stop play, as cricketers, including Suranga Lakmal, felt uneasy. However, third umpire David Boon consulted the doctor and concluded the players can continue.

Don’t be surprised if the day is called off in Kotla.

Chandimal is begging to umpires to prevent this Kohli onslaught by wearing mask.#INDvsSL

However, the commentators tagged it as bizarre, pointing out the fact that the batsmen were able to spot the ball easily and that the smog was not so dense to use a mask while fielding. Earlier in 2016, a day of two Ranji Trophy matches had to be called off due to the intense fog. The players had also complained of burning sensation in eyes.

After the warm-ups in the morning, players complained of burning sensation in their eyes. I have never experienced such a situation before in Delhi. It is unprecedented. Obviously, visibility was also a concern because of the smog, Bengal captain Manoj Tiwary had told Indian Express about his experience. 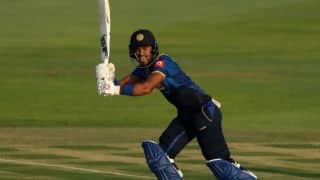