Sri Lanka were looking  good at lunch with a score of 395 for six from 111 overs with Dilruwan Perera and Niroshan Dickwella unbeaten at nine and 63 respectively at the end of the first session of Day 2 of the second Test between Sri Lanka and South Africa at the Sinhalese Sports Club in Colombo.

Mahela Jayawardene was the highlight of the first session with his graceful strokes. The veteran, who has announced his intention to retire from Tests later this year, hit a flamboyant 165 from 284 balls before running himself out by a direct hit from Alviro Petersen. Dickwella on the other hand posted an impressive half-century on debut in an innings which contained seven boundaries and a six.

Sri Lanka resumed from their overnight score of 305/5, with both Jayawardene and debutante Niroshan Dickwella looking set at the crease. The two soon began to toy with the South African attack, with Dickwella reaching his half-century from 69 balls. The two hit half a dozen  fours as they added 80 runs to the board before Jayawardene departed, whose dive wasn’t enough to save from the well-directed throw from Petersen.

Dilruwan Perera was the next man to come in and announced his arrival in style by smashing JP Duminy for a six off his second ball. Towards the end of the session, Dale Steyn was reintroduced to the attack. The duo of Morne Morkel and Vernon Philander had earlier troubled the batsmen occasionally with short-pitched deliveries, creating some chances in the process. 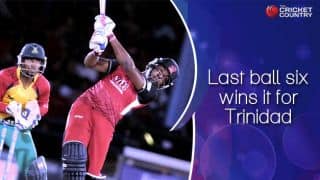