As a matter of fact, Indian cricketers were seen wearing masks during warm-up on Tuesday.

There were controversies over Sri Lanka cricketers wearing masks and feeling uncomfortable while fielding previously. However, they continued using masks during India‘s second innings of the Delhi Test. Earlier, Suranga Lakmal and Lahiru Gamage had been widely affected by the climate and had to be taken off the field. After dismissing Murali Vijay early, Lakmal had to leave the field, throwing up on the field. As a matter of fact, Indian cricketers were seen wearing masks as well during the warm-up session on Tuesday.

“This match should not have taken place in the first place. It is time the ICC (International Cricket Council) comes up with a policy on pollution. You have fast bowlers, batsmen and fielders out there exposed to these very harmful pollutants over five days at a stretch. It takes a serious toll on your health in the long run,” Indian Medical Association president K. K Aggarwal told AFP.

The Sri Lanka fielders had complained time and again on Day Two for a pause of play due to “bad air quality”. The Delhi smog affected Sri Lanka cricketers health and at a certain point, they could only field 10 cricketers. Virat Kohli declared India s innings at 536 for 7. Though Ravichandran Ashwin and Rohit Sharma were seen wearing masks in the dressing room, none of the Indian fielders wore masks while playing. 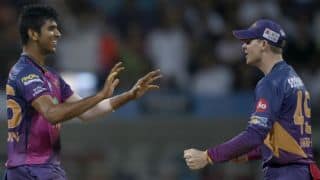