Sri Lanka have ended day two of the third Test against England at 162 for 1. They trail the hosts by 254 runs, after they posted 416 in the first innings. Openers Dimuth Karunaratne and Kaushal Silva posted a 100-run partnership, with both of them reaching half-centuries. But Karunaratne was then dismissed in unlucky fashion, getting caught bu Jonny Bairstow of Steven Finn’s bowling. Kusal Mendis came in next and stuck along with Silva to make sure the visitors do not lose another wicket.   FULL CRICKET SCORECARD: England  vs  Sri Lanka , 3rd Test match at Lord’s

Earlier, Bairstow and Chris Woakes continued from where they left off yesterday. Both the batsman took their time, and scoring their highest Test scores respectively. By the time Woakes was dismissed for 66, most of the damage was done, with England well placed at 371 for 7. Since then, Sri Lanka did well to fight back and restrict them to 416. Bairstow remained unbeaten at the end at 167, the highest score by a English wicketkeeper in Tests.

In their reply, Sri Lanka batted beautifully. Both the openers showed loads of confidence, playing some brilliant shots. The highlight of their innings was the pace at which they were going. Sri Lanka managed to go into Tea at 62 for 0 from 15 overs, scoring just over 4 RPO.

After the break, Lankan batsmen started off positively, scoring two boundaries in the very first over. Karunaratne survived a close lbw call of Woakes, which was reviewed by the hosts. The ball was found to be hitting the stumps by less than 50%, which meant the not out decision stood, much to the disappointment of the hosts. Things went bad when Broad left the field injured for a brief period.

Slowly but steadily, both the batsmen started playing with great confidence. They defended with intent and played some brilliant shots. The 27th over of the innings bowled by Anderson was taken for 12 runs, which showed their intent to take on the loose deliveries. The pair reached 100-run partnership in the 28th over, showing the way forward for the batsmen to come. Soon, both the batsmen reached their respective half-centuries, a feat considering the mediocre show in the earlier matches.

England soon got their first and only scalp for the day, as Finn managed to remove Karunaratne for 50. Next to come in was Kusal Mendis. They started of cautiously and slowly but steadily got going. Sri Lanka ended the day at 160 for 1. 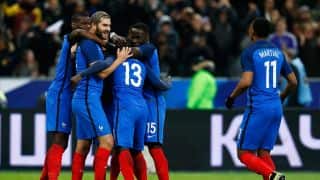 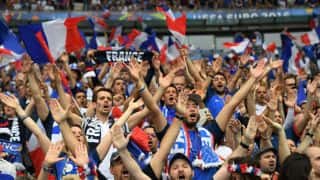