England declared their second innings at 233 for 7, with skipper Cook unbeaten at 49

Sri Lanka finish Day Four on 32 for no loss, needing 330 on the final day to win against England in the third Test at Lord’s. Having been set 362 to chase, the openers Dimuth Karunaratne and Kaushal Silva played brilliantly to see of the 12 overs of the day. Alex Hales’ 94 put England on track for big score, before the rail played spoilsport. The first session was washed out, much to the dislike of the hosts. In the second session, Hales and Cook formed a solid partnership before Hales’ dismissal. For Sri Lanka, Nuwan Pradeep and Shaminda Eranga took three wickets each. FULL CRICKET SCORECARD  England vs Sri Lanka 2016, 3rd Test at Lord’s

The final session was a stop start, with rain playing the spoilsport. Twice covers were called upon in the space of two overs. Once the play resumed, both Ali and Cook played with an attacking intent. In the process, Ali was out, caught at long off by Herath. But that did not derail Cook, who played a few unorthodox shots and hit a six on his way to 49. Despite being just one short of a fifty, he decided to call of England’s innings, hence giving the visitors a target of 362.

The Sri Lankan openers came out to bat with just 12 overs remaining in the day. They started off without much trouble, successfully seeing of the first six overs, with Stuart Broad and James Anderson unable to get the breakthrough. Slowly but steadily, both the batsmen grew in confidence, especially Silva, who hit two brilliant shots of Broad for a boundary.

Earlier in the day, Hales scored 94 which helped England reach 233 for 7 before they declared. Hales, continuing from yesterday’s 41, missed out on a maiden Test century for the third successive match. 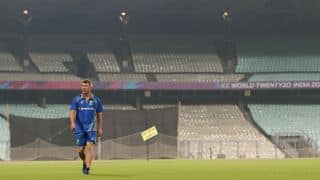