Sangakkara looked all set to build on his Bradman-esque record against Pakistan.

Kumar Sangakkara and Kaushal Silva steadied Sri Lanka after losing opener Upul Tharanga in reply to Pakistan‘s excellent batting effort earlier in the day to post 451. Younis Khan took off where he left at the end of Day One to continue on his 14-year old feast on the Sri Lankan bowling attack to post a scintillating 177. Younis was well supported by Asad Shafiq (75), who attacked the bowlers at will in the early exchanges of the day and was unfortunate to miss out on a well deserved hundred.

Pakistan started the day with an attacking intent and used their sweep to negate the threat of Rangana Herath. Shafiq in particular left the fielding team flummoxed and runs came thick and fast for the visitors. Herath got rid of Shafiq off a gem and Younis’ mammoth ton came to end with a tired chip off Dilruwan Perera. The tail was exposed and just when Sri Lankan bowlers had thought their job was done, wicketkeeper Sarfraz Ahmed and left-arm spinner Abdur Rehman further inflicted misery on the bowlers though a terrific counterattack.

Rehman and Sarfraz brought up their half-centuries and Pakistan were cruising. The last few wickets though, fell cheaply and Perera continued his tremendous run of form from the Tests against South Africa to scalp another five-wicket haul. The very fact that the Pakistan tail-enders were at ease with the wily Sri Lankan bowling underlined how good the Galle wicket was for batting. After Tea was taken at the end of the Pakistan innings, Upul Tharanga made a belligerent start to the innings with some spanking drives but a brilliant in-swinger by Junaid Khan ended the opener’s stay at the crease.

As the session progressed, Saeed Ajmal and Rehman got purchase from the wicket and looked poised to make inroads in the hosts’ batting lineup. There were plenty of half-chances but the ball just wouldn’t carry to the fielders. Silva, in particular lived dangerously and was his usual scrappy self till dusk. Sangakkara has more runs against Pakistan in Test cricket than any other player and looked steady, composed and solid. A big score from the classy southpaw tomorrow would come as no surprise. 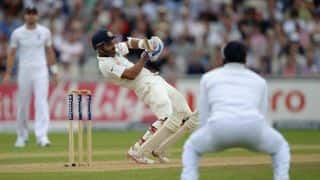 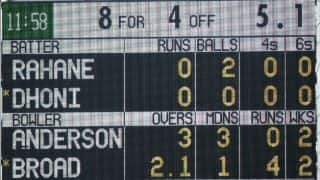