Sri Lanka survive the first session, losing just one wicket as they were enforced a follow on on Day 3

The second innings of Sri Lanka can be considered as damage control after horrible display of batting in First innings. They are currently 58 for 1 going into lunch and by trailing 339 runs. The only wicket they lost was of Dimuth Karunaratne who was looking comfortable at the crease timing the ball with precision and hitting boundaries. His stay at the crease was short-lived because of Chris Woakes cracker of a delivery outside the off stump. He edged it towards second slip fielder and Joe Root made no mistake. He walked back to the pavilion after scoring 26. The Sri Lankan batsmen are playing nothing similar to first innings. They are cautious while playing the new ball and avoiding deliveries which are pitched outside the off stump.  LIVE CRICKET SCORECARD: England vs Sri Lanka, 2nd Test at Chester-le-street

England bowlers have been attacking consistently with their odd short ball and targeting the ball to the middle and off stump with round the wicket angle. They are barely giving any room to the batsmen to get settled with an exception of a loose delivery. The field placement has been attacking as they have looked to block the singles and keep the pressure on the batsmen. Steven Finn is still wicket-less, both in this innings and the match. Sri Lanka’s First Innings Report

Earlier, Sri Lanka walked into bat with 91 for 8. Their stay at the crease was short-lived as England bowlers started attacking from the first ball. Nuwan Pradeep fell prey to Stuart Broad on the third delivery of the first over. Bowlers tried to make life tough for the batsmen on the crease with short balls and attacking field. Thirimanne tried to pull off a Moeen Ali as he showed signs of aggression trying to score as many runs as he can before the fall of last wicket. But he failed to score runs as he was caught in the 30 yard circle as he was trying to slog James Anderson’s swinging delivery. 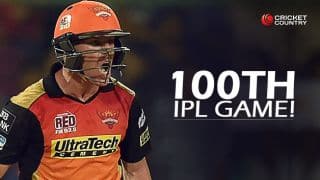 MS Dhoni vs Virat Kohli in the United States?