Sri Lanka qualify for Asia Cup 2014 final with a huge win over Afghanistan.

Afghanistan suffered a batting collapse to succumb to a 129–run defeat against Sri Lanka in the seventh match of the Asia Cup 2014 tournament, at Mirpur on Monday. Chasing a daunting target of 254 runs, the Afghans kept losing wickets at regular intervals and were bundled out for 124 in 38.4 overs.

Mohammad Nabi scored a fluent 37 off 43 balls and added 48 runs with Najibullah Zadran for the sixth wicket, but his effort wasn’t enough to take Afghanistan past the finishing line in the clash.

Afghanistan batsmen struggled right from the word go as none in the top order could stand against the Sri Lankan bowlers. While Noor Ali Zadran and Asghar Stanikzai showed some fight with their 45–run stand for the second wicket, the middle-order failed to carry the momentum as Sri Lanka registered a big win.

Mohammad Shahzad started off on a positive note in the second over, when he clobbered Suranga Lakmal for a six over the covers. But on the fourth ball, he played a reckless stroke to be dismissed for seven.

Stanikzai and Noor Ali then joined forces to take their side ahead, and their strong second-wicket stand ensured Afghanistan shrug off the pressure that was created with Shahzad’s early wicket. Afghanistan were well placed at 47 for one after 11 overs.

Perera provided Sri Lanka the big breakthrough when he knocked down Stanikzai’s off-stump in the 12th over, and the batsman could not resist to express his disappointment as after all the hard work was undone by one poor stroke. Moreover, Stanikzai was Afghanistan’s biggest hope in this huge chase as he was coming off from a fine innings of 90 not out in the previous clash against Bangladesh.

Afghanistan slipped further soon as Noor Ali was caught at point by Chathuranga de Silva off Ajantha Mendis, as the Sri Lankan spinner struck in his first over. Afghan woes increase further when their batting mainstay Nawroz Mangal was caught behind the wickets by Kumar Sangakkara off Perera.

Afghanistan’s another hero from their historic win in the last match, Samiullah Shenwari’s dismissal for mere six meant all hopes were over for their side. However, their captain Nabi hadn’t thrown the towel yet as his 48-run stand for the sixth wicket pushed Afghanistan past 100.

Earlier in the first innings, Kumar Sangakkara cracked his 85th One-Day International (ODI) half-century and an unbeaten 45 not out from Angelo Mathews helped Sri Lanka set a 254-run target against Afghanistan.

Electing to bat first, Sri Lankan batsmen failed to find momentum as none apart from Sangakkara and Mathews to an extent could make a mark against the Afghanistan side. Mirwais Ashraf was the pick among the bowlers for them, as he claimed two wickets for 29 runs off his eight overs.

Towards the end, Angelo Mathews and Thisara Perera added crucial 69 runs for the seventh wicket to push Sri Lanka past the 250-run mark. Mathews remained unbeaten on 45, which came off 41 balls and four boundaries. 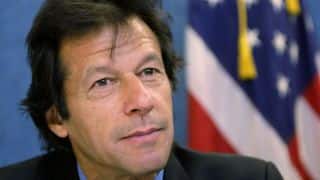 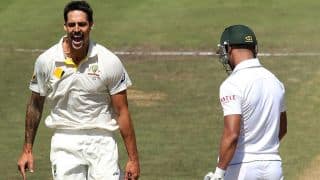