Defending World Cup and Champions Trophy champions India slumped to a humiliating 161-run defeat against Sri Lanka in the third match of the Caribbean tri-series. 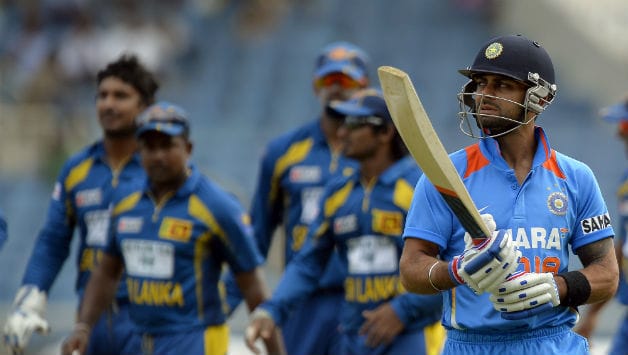 Defending World Cup and Champions Trophy champions India slumped to a humiliating 161-run defeat against Sri Lanka in the third match of the Caribbean tri-series. India have now lost both the matches they have played so far and sit at the bottom of the points table going into the second round of games. Sri Lanka picked up a bonus point for restricting India to below 278.

On a rare off day, where they welcomed their 22nd ODI skipper in Virat Kohli after regular incumbent MS Dhoni’s hamstring injury, India failed to pick themselves up right from the start. A masterclass in batting from openers Upul Tharanga (174 not out off 159 balls) and Mahela Jayawardene (107 off 112 balls) enabled Sri Lanka to post a commanding 348 for one, before the famed Indian batting line-up could not even manage 200.

The Sri Lankans made up for their collapse against the West Indies in the first match, where they were bowled out for 208 and conceded a bonus point. Today, their opening pair made 213 themselves, making it the ninth time that Sri Lankan openers have been involved in 200-plus partnerships in One-Day Internationals (ODIs). Tharanga, who carried his bat to his highest ODI score and also became just the third Sri Lankan after Sanath Jayasuriya and Tillakaratne Dilshan to score more than 150 runs in an ODI, has been involved in seven of them, which goes to show the 28-year-old’s prowess.

Tharanga is one of those inconspicuous performers on the field; you’ll never know when and how he scores his runs. To the ignorant, he crossed 5,000 today in his 157th ODI innings. To put things further into perspective, Tharanga, with 13 hundreds now, has more ODI tons than names like Sir Viv Richards (11), Hashim Amla (11), Kevin Pietersen (9) and Michael Clarke (7).

The Indian bowlers struggled throughout the near four-hour first session and would have perhaps rued their decision to bowl first. The pitch at Sabina Park, like it has in the previous games, looked dark and full of moisture. Hosts West Indies had won both their games after chasing and India’s stand-in captain Virat Kohli could be forgiven for going with the statistics. However, Kohli would have hoped for a better performance from his bowlers, who put in one of their worst performances in recent times.

India chose to drop Bhuvneshwar Kumar for the game and went with Mohammed Shami Ahmed, who was called to the Caribbean in place of the injured Irfan Pathan. The decision was to be proven fruitless as Shami went wicketless for 68 runs in his 10 overs. His mates in India’s bowling attack were also in for similar brutal treatment from the Lankans, with Ishant Sharma going for 68 in nine overs and none of the top five bowlers conceding less than six runs an over.

In reply, India’s batting also came a cropper as none of their batsmen managed to score a half-century, although Ravindra Jadeja (49 not out) was on course for one before his team was bowled out. It’s not that India’s line-up isn’t capable of chasing 350, even without the ever-reliable Dhoni. It was perhaps a hangover from the Champions Trophy, but whatever it was, it is in India’s best interests that they shake it off before going into Friday’s must-win encounter against the West Indies.

You could say that India missed Dhoni. Without him, they looked like a bunch of headless chickens on the field. Their fielding, which was raved by the world during the Champions Trophy, looked pedestrian. Murali Vijay in particular, who was brought in as Dhoni’s replacement in the eleven, looked as if he had been woken up from deep slumber and thrusted onto the field. Their batting was listless as well — except for Jadeja’s innovative innings with the tail — and missed the calming influence of Dhoni in the middle-order. Be that as it may, India have to play at least two more matches in the series without their most experienced team member.

Man of the Match: Upul Tharanga