Sri Lanka were 461 for 4 in their first innings at lunch on the second day of the opening Test against Bangladesh in Galle on Saturday. 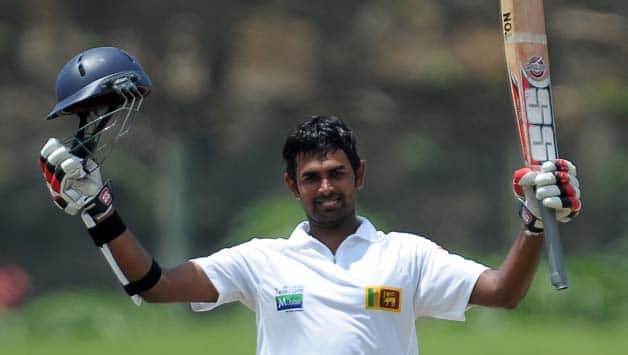 Sri Lanka were 461 for 4 in their first innings at lunch on the second day of the opening Test against Bangladesh in Galle on Saturday.

Lahiru Thirimanne was unbeaten on 113 at the break with Dinesh Chandimal (55 not out).

Earlier on Day One, Kumar Sangakkara smashed a superb 142 to put Sri Lanka on course for a big first-innings total in the opening Test against Bangladesh in Galle on Friday.

The left-hander hit three sixes and 16 fours in his 31st Test hundred as Sri Lanka posted 361-3 at stumps on the opening day after winning the toss on a good batting track.

Lahiru Thirimanne, who added 124 for the third wicket with Sangakkara, was unbeaten on a solid 74 when play was called off due to rain with 4.3 overs remaining. Skipper Angelo Mathews was 25 not out.

Sangakkara also equalled Mahela Jayawardene‘s record of most centuries by a Sri Lankan in Tests. Openers Tillakaratne Dilshan (54) and Dimuth Karunaratne (41) were the other main scorers.

“Going into this Test match I have batted only three or four days but I worked pretty hard on those sessions. I just wanted to really get over my first ball,” said Sangakkara.

“I was very lucky that it was short and wide and I managed to get runs off the first ball. That really gives you the confidence. I think 361 is a great score and gives us a platform to build the game in the morning.”

Former skipper Sangakkara dominated the Bangladeshi attack with exciting strokeplay, gathering runs comfortably against both pace and spin during his 226-ball knock.

Sangakkara, dropped on 111 by Mohammad Ashraful at mid-on off off-spinner Sohag Gazi, added 31 more runs before being caught by Jahurul Islam in the covers off the same bowler.

Gazi was Bangladesh’s only wicket-taker, finishing the day with 3-101 off 31 overs.

Sangakkara, who returned to the team after missing the third and final Test in Australia in January due to a finger injury, reached his hundred with two runs to mid-wicket off left-arm spinner Elias Sunny.

Dilshan played some attractive shots as he smashed four boundaries early in his innings, two each off seamers Shahadat Hossain and Abul Hasan. He then hit two successive fours off Gazi.

He completed his 22nd Test half-century in style when he drove Sunny past mid-on for a four before falling in the next over, caught by debutant Mominul Haque at mid-off off Gazi.

Left-handed Karunaratne, who retired hurt on 15 after being struck on the elbow while trying to pull Hossain in the ninth over, returned after the dismissal of Dilshan.

He top-edged a Hasan delivery over the wicket-keeper’s head for the first six of the match but fell in the next over, trapped leg-before by Gazi after adding 67 for the second wicket with Sangakkara.

Sri Lankan batsman Kithuruwan Vithanage, and Bangladesh’s Mominul Haque and Anamul Haque made their Test debuts. Anamul replaced hard-hitting opener Tamim Iqbal, who was ruled out of the match due to an injury. 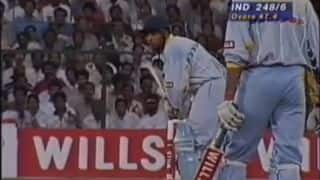