Dhammika Prasad runs through the batting as England tottering at 587 for five.

Sri Lanka are eyeing their maiden Test series win in England as the hosts are tottering at 57 for five in chase of 350 runs. It was a day were nothing went right for England. Skipper Angelo Mathews hammered 160 and shared a record eighth-wicket stand with Rangana Herath. Coming back to bowl, Dhammika Prasad ripped through the England batting picking four top order wickets. England are 57 for five.

After conceding a 108-run first innings, the Lankans once again dug deep and snatched the momentum from the hosts in this Test. The match was hanging in balance at the start of fourth day’s play with England needing six wickets and the Lankans had already secured a 106-run lead. The Lankans were hoping for Mahela Jayawardene and Mathews to rally them ahead and they did exactly that. The new ball failed to do any wonders for England. It was not until Jayawardene turned out to be a bit over-ambitious going after an away going delivery and was caught behind for 79.

England’s only memorable moment of the day came when Liam Plunkett bagged two wickets in two balls after the dismissal of Jayawardene (79). But from thereon started a marathon partnership between Herath and Mathews which lasted 149 runs.

If there was any game-changing moment in this game then it had to be the second session of the fourth day. With 203 ahead and three wickets remaining, England could’ve finished the tail and kept their hopes pretty much in this match. But Herath’s batting encouraged Mathews to keep rotating the strike. England were so concerned at taking out the tail that Mathews breezed in to the 90s and scored his second consecutive Test ton. England managed to find the breakthrough before tea removing Herath for 48 and ending the 149-run stand (the second highest at Headingley).

England’s chase began on a steady note. But it was on predicted lines as the wicket didn’t have anything much for the pacers having seen the English counterparts toil all day long.

However, the downslide started with the unfortunate dismissal of Alastair Cook who chopped one on to his stumps for 16. From thereon, it looked as though Dhammika Prasad had created some sort of magic.  He trapped Gary Ballance for a golden duck and the followed it up with the wickets of Sam Robson (24) and Ian Bell (8). 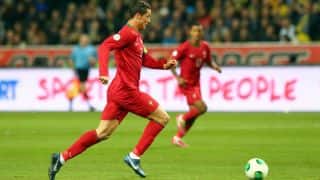