Dinesh Chandimal feels Sri Lanka are not overawed by Kohli's good run with the bat.

Sri Lanka vice-captain Dinesh Chandimal on Thursday said that his team was not too much worried about Virat Kohli‘s fine form as his side’s bowling attack can unsettle the Indian batting line-up in their crucial Asia Cup 2014 league match on Friday.

The Lankans began their Asia Cup campaign with a 12-run victory over defending champions Pakistan with slinging paceman Lasith Malinga taking a five-wicket haul, and Chandimal said his side’s bowling can take on the Indian batting.

“India are a very good side, especially in last two three years they have been playing good cricket. Virat Kohli is batting exceptionally well. They have some really good players but we got bowlers like Malinga. So we will see tomorrow,” Chandimal said on the sidelines of the team’s practice at the Sher-e-Bangla National Cricket Stadium.

“We are also doing well at the moment. Everyone in both batting and bowling departments are in good form. We are looking forward to a good job.”

“We all know, he is a really good batsman. But as I said we have something in our mind and we will see it tomorrow. We are keeping our fingers crossed,” said Chandimal.

“They played really special. They are good at chasing but we have a good bowling attack. We have something in our sleeves for them tomorrow so we are looking forward to do that.”

Malinga’s match winning 5 for 52 against Pakistan had given them a winning start and Chandimal said they would look to take early wickets to expose the inexperience Indian middle order without Mahendra Singh Dhoni.

“It is crucial for us to get early wickets. With Dhoni not in the middle-order we might be in a good chance if we can take early wickets. Everyone is fit and looking forward to the match.”

Having come in Bangladesh in January for a full series, Sri Lanka would have the advantage of knowing the conditions better, Chandimal said.

“We are here for quite some time, we know the conditions better like when the dew is going to play a role and how the wicket would behave… We have got the advantage.”

Chandimal hinted that their mystery spinner Ajantha Mendis may be included on Friday.

“He is a wicket taking bowler. I think he has a good chance to play in tomorrow’s game.” 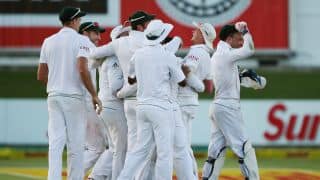