Kumar Sangakkara was unbeaten on 29 in his final international match and Kaushal Silva was on 30.

Colombo: Kumar Sangakkara survived a torrid start in his final Test to help Sri Lanka recover in the second Test against India at the P. Sara Oval in Colombo on Friday. Sangakkara was unbeaten on 29 as the hosts, replying to India’s first innings total of 393, went to tea on the second day at 65 for 1.  Kaushal Silva, who was caught behind off a Stuart Binny no-ball on 14, was on 30 after fellow opener Dimuth Karunaratne was leg-before to Umesh Yadav in the second over of the innings. India, seeking a series-levelling win after losing the first Test in Galle by 63 runs, were all out in the third over after lunch with wicket-keeper Wriddhiman Saha making 56. Live cricket scorecard: India vs Sri Lanka 2015, 2nd Test at Colombo, Day 2

Sangakkara, the fifth-highest run-getter in Test history, walked in to a warm applause from some 4,000 home fans at the P. Sara Oval and a guard of honour by the Indian fielders. The left-hander kept out a first-ball yorker from Yadav and remained scoreless for 13 deliveries before steering Ishant Sharma to third man for two to get off the mark. Sangakkara drove Yadav to the point fence for his first boundary, but escaped narrowly  on 24 as Ajinkya Rahane failed to grasp a sharp chance in the slips after the batsman slashed at Ravichandran Ashwin. Saha followed his 60 in the first innings at Galle with another gutsy half-century before he was ninth out, leg-before to left-arm spinner Rangana Herath after lunch. Live cricket updates: India vs Sri Lanka 2015, 2nd Test at Colombo, Day 2

Saha and Amit Mishra put on 46 for the eighth wicket to frustrate the hosts’ bid to wrap up the innings quickly after India resumed the day at 319 for 6. Mishra, essentially a leg-spinner, made 24 with three boundaries before he was caught behind off a rising delivery from fast bowler Dushmantha Chameera. Saha led a charmed life at the crease with two lucky escapes off the bowling of seamer Dhammika Prasad before he had added to his overnight score of 19. The first time, the bail failed to dislodge after the ball brushed the off-stump, and then he survived an appeal for a low catch by wicketkeeper Dinesh Chandimal which replays showed may have hit the ground first. Ravichandran Ashwin, who joined Saha after Rohit Sharma was dismissed for 79 off the last ball of the day, made two before he holed out at extra cover off Angelo Mathews. Herath finished with four wickets, while Prasad, Mathews and Chameera claimed two each. 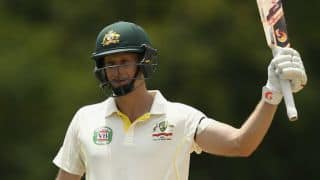