Sri Lanka is ready to step in and host the Asia Cup one-day tournament and the World Twenty20.

Sri Lanka is ready to step in and host the Asia Cup one-day tournament and the World Twenty20 if the two events are pulled out of violence-plagued Bangladesh, a top official told AFP on Friday.

The Asia Cup had been scheduled to be held between February 24 and March 7 in the Bangladeshi capital Dhaka, which has been hit by violent protests and strikes in the build-up to Sunday’s general election.

Bangladesh is also due to host the 16-nation World Twenty20 tournament, the nation’s biggest ever sporting event, from March 16 to April 6.

The Asian Cricket Council (ACC) is meeting in Colombo on Saturday to decide if the regional competition that features India, Pakistan, Sri Lanka and Bangladesh can go ahead in Dhaka.

“We are ready to host the Asia Cup if the ACC wants another venue,” Sri Lanka Cricket’s secretary Nishantha Ranatunga said in Colombo.

“We have the grounds and the necessary infrastructure to host an event like that at short notice. We are also ready to host the World Twenty20 if we are asked.”

Election-related violence in Bangladesh has claimed more than 140 lives since late October, with opposition parties boycotting the polls and organising a series of blockades across the country.

The three venues chosen for the World Twenty20 – capital Dhaka, Chittagong and Sylhet – have all experienced violence over the past month.

A spokesman for the International Cricket Council, which owns the tournament, told AFP last month that the world body was “actively monitoring” the situation in Bangladesh.

The danger posed to teams was underlined in December when a small bomb exploded outside the hotel of the West Indies Under-19 team in the port city of Chittagong, prompting them to cut short their tour.

The Pakistan Cricket Board said on Thursday it was seeking its government’s advice about sending a team for the World Twenty20 due to the continuing political unrest in Bangladesh.

Sri Lanka successfully hosted the World Twenty20 in 2012, which was won by the West Indies.

The Sri Lankan board is still undecided whether it will go ahead with a month-long tour of Bangladesh from January 27 which features two Tests, two Twenty20 matches and three One-Day Internationals.

“We have not decided yet,” Ranatunga, whose brother Arjuna was a World Cup-winning captain, said.

“We will be guided by security advice. We hope to take a decision soon.” 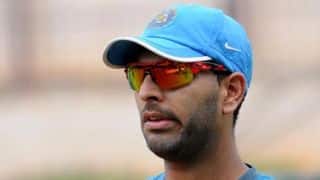