Chasing Sri Lanka's 482-run first-innings total, Pakistan needed a solid start but were reduced to 115 for 4 at the end of first session on Day Three of the second Test.

Chasing Sri Lanka‘s 482-run first-innings total, Pakistan needed a solid start but were reduced to 115 for 4 at the end of first session on Day Three of the second Test. At the Dubai International Cricket Stadium on Sunday, Pakistan openers tried to carry forward the work from Day Two’s 51 for no loss. However, the Sri Lanka bowlers tasted early success to dismiss both the openers. They also removed two more top order batsmen to dominate the first session. Azhar Ali (28*) remained unbeaten before tea along with Harris Sohail (6*).

Unlike Day Two, the Lankan bowlers were effective on Day Three. Both openers Sami Aslam and Shan Masood were removed in consecutive overs. The double strike reduced Pakistan to 65 for 2. Azhar Ali showed some defense but kept on losing partners at the other end. Next in, Asad Shafiq and Babar Azam also departed without any mentionable contribution. Pakistan’s hopes will be on Azhar now to replicate Dimuth Karunaratne’s efforts and lead the team’s batting to a good score.

Lahiru Gamage gave Sri Lanka their first breakthrough while Dilruwan Perera, Suranga Lakmal and Rangana Herath latter dismissed one batsman each. Sri Lanka gave away only 64 runs in the session, bagging 4 wickets and dominated yet another session in the match. 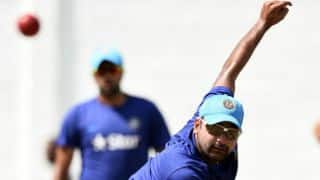