Jayawardene and Herath had also missed playing against Pakistan at UAE in 2013.

Senior Sri Lankan batsman Mahela Jayawardene and off-spinner Rangana Herath have been rested for the one-day series against Bangladesh starting on February 17.

The two players will not play in the three-match One-Day International (ODI) series, but will be available for the two Twenty20 matches on February 12 and 14 preceding the 50 over games, said Sri Lanka Cricket in a statement.

The pair also missed out on five ODIs against Pakistan played in the United Arab Emirates (UAE) in 2013 for personal reasons.

The selectors have also left out batsmen Dimuth Karunaratne and Lahiru Thirimanne from the one-day squad that played in the UAE, and brought in spinning allrounder Angelo Perera, who made 244 off 204 balls in a recent first-class game.

Perera has played two one-dayers and a T20 for his side. 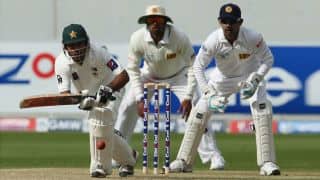