Birthday Boy Shikhar Dhawan's 67 remained highest by any Indian batsmen in the current innings as the Sri Lanka spinners bagged two wickets in the second session of Day Four.

Birthday boy Shikhar Dhawan‘s 67 remained highest by any Indian batsmen in the current innings as the Sri Lanka spinners bagged two wickets in the second session of Day Four. India put up 192 for 4 before tea on Tuesday at Delhi, extending their lead to 355. At the crease now are skipper Virat Kohli (25*) along with Rohit Sharma (28*).

India were 51 for 2 before lunch. In the second session, Dhawan and Pujara built a crucial 77-run partnership after India lost Murali Vijay and Ajinkya Rahane early. Indian batsmen were in search of quick runs. Each of them, barring Rahane, maintained a strike rate of over 70. Dhawan and Pujara took India past the 100-run mark. Pujara also became the highest run-getter in Tests played in 2017.

However, he was denied his half-century for a solitary run. Pujara played Dhananjaya de Silva’s delivery expecting turn when it did not, edging it to Angelo Mathews at slip instead. India lost Dhawan within the next five overs, for 67, and were reduced to 144 for 4. Dhawan tried to step out for a big hit, getting stumped.

The regular fall of wickets, however, did not affect India much as Rohit Sharma kept on hitting boundaries soon after he started his innings. Kohli, too, sought quick runs. They built up a 48-run unbeaten partnership as the teams went for tea. Despite losing two wickets, India dominated the session, scoring 141 runs. 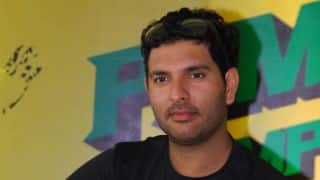