Saeed Ajmal led Pakistan's fightback as he took two wickets, including that of centurion Kumar Sangakkara on the second day of the third Test against Sri Lanka on Friday. 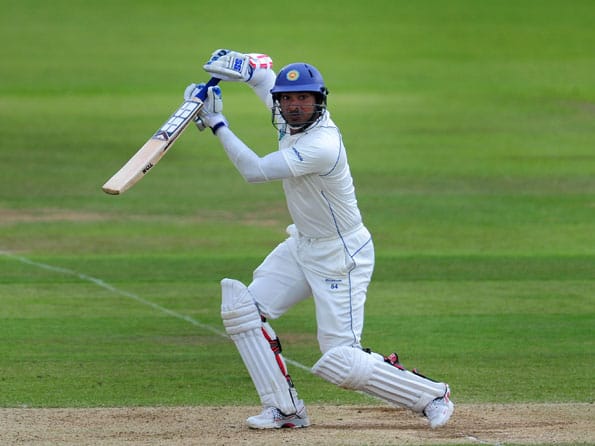 Saeed Ajmal led Pakistan’s fightback as he took two wickets, including that of centurion Kumar Sangakkara on the second day of the third Test against Sri Lanka on Friday.

Sri Lanka, well placed at 300/3, lost five wickets in the space of 59 runs as the off-spinner removed Sangakkara for 144 soon after lunch, before Sri Lanka moved to 359/8 at tea at the Sharjah Stadium.

Kaushal Silva returned unbeaten on 21, while paceman Junaid Khan dismissed Dhammika Prasad for 17, caught behind in the last over before tea, to bring Pakistan close to wrapping up the innings.

Pakistan knew they had to remove Sangakkara to make inroads into the Sri Lankan middle-order after they dismissed Angelo Mathews for 17 in the last over before lunch, caught behind off left-arm spinner Abdul Rehman.

Sri Lanka had also looked to Sangakkara to ensure they do not spoil a good chance to post a big total after they were dismissed for 197 in the drawn first Test in Abu Dhabi and for 239 during their nine-wicket defeat in the second in Dubai.

It was Ajmal who finally provided Pakistan with the prized wicket of the stylish left-hander when his delivery jumped on Sangakkara who failed to keep a pull down and was caught in the slip by Younis Khan.

Sangakkara hit 13 fours and two sixes during his 344-ball knock, which began in the first over of the match on Thursday. This was his second century of the series followed by an epic match-saving 211 in Abu Dhabi.

Sangakkara put on 84 for the third wicket with Mahela Jayawardene (39) and another 39 with Mathews for the fourth after Sri Lanka resumed at 245/2.

Jayawardene managed to add just seven to his overnight score of 32 before being given leg-before off paceman Khan. Jayawardene hit two boundaries during his highest score of the series.

Sangakkara and Mathews negotiated Pakistan’s pace-spin attack with confidence, taking Sri Lanka past the 300-mark in the penultimate over before lunch.

But Pakistan struck in the last over before lunch as they got the second wicket in the session, with Sri Lanka managing 55 runs in two hours.

Saurashtra on top as Jadeja scores a majestic triple hundred