After Sri Lanka s defeat in Bangladesh s 100th Test at the P Sara Oval last week, one of the team members has reportedly been interrogated by the ICC Anti-Corruption Unit (ACU) officials.

After Sri Lanka s defeat in Bangladesh s 100th Test at the P Sara Oval last week, one of the team members has reportedly been interrogated by the ICC Anti-Corruption Unit (ACU) officials. The player is known to have received an ISD call from USA which led to the questionnaire. However, it is said to be a fan-call still after the incident. The cricketer himself told the ICC ACU official about the call after the match, as revealed by Lakshan de Silva, the ICC ACU official handling the department in Sri Lanka. The defeat has triggered media uproar in the island nation. FULL CRICKET SCORECARD, Sri Lanka vs Bangladesh, 2nd Test at Colombo

De Silva told the Sunday Times, Yes, we did call up the player and questioned him about a telephone call that he had received from the United States. The player had promptly brought this to the notice of the authorities and ICC anti-corruption officials who were also present at that time interviewed the player as soon as the Test match was over. However, we have not come across anything that would implicate the player so far, but, we have to find out the real details of who this cricket fan is. However, since the monies involved in such dealings are colossal, we have to take extreme precautions. At the same time we also have to establish the bone-fides of the caller from overseas.

In Sri Lanka, allegations of this nature are extremely rare where international cricket is concerned. However, we are kept busy by certain people who keep relaying clandestine ball by ball commentaries in cahoots with bookmakers who conduct ball-by-ball bets. Even during the just concluded series, we evicted several such people from the stadiums but the numbers are growing, de Silva concluded. 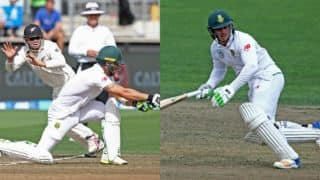