Sri Lanka faced yet another batting collapse with as many as eight wickets falling under a span of 40 overs. They are currently 91 for 8 and are struggling to avoid another follow on. They are scoring at a run rate just over two runs per over. James Anderson drew first blood when he stunned Dimuth Karunaratne by knocking over his leg stump. They were 32 for 1 in 7 overs at Tea Break. After that Broad removed Kusal Silva, coming round the wicket and shaping the ball away from the left hander. He nicked the ball into the safe hands of wicketkeeper Jonny Bairstow. After Tea Break, the visitors had another batting collapse losing 7 more wickets at the end of the Day 2, Stumps. LIVE CRICKET SCORECARD: England vs Sri Lanka, 2nd Test at Chester-le-street

The only batsman who showed some signs of hope was Kusal Mendis who scored 35. Anderson took the wicket of Dinesh Chandimal putting more pressure on the batting side. Chris Woakes was introduced into the attack and he responded by picking up the wicket of Angelo Mathews in his first over. Mathews is having a bad run in the last few matches, having scored just  42 runs in last three Test matches with an average of 14, which are his career’s lowest figures. READ: Rangana Herath takes 300 Test wickets

Woakes followed it up with a double blow, first he removed Mendis, who was looking comfortable on the crease and then getting youngster Milinda Siriwardana out for a duck. That display of bowling reduced Sri Lanka to 67 for 6. They were struggling to keep the wickets intact. Lahiru Thirimanne and Rangana Herath decided to play English bowlers defensively. They bowled maidens after maidens. Moeen Ali was introduced in the attack who bowled with precision keeping the ball in and around middle off stump line, not giving any room to the batsmen to work the ball into the gaps. Moeen Ali’s rescues England with a century

Broad was introduced into the attack. Herath pulled the short ball towards the boundary. In the next over Broad took the wicket of Herath and Eranga  in a single over to increase the worries of Sri Lanka. England had a strong hold over the match at the end of the Day 2, Stumps. A follow-on is in waiting for Sri Lanka and England might win it by a few runs and an innings like they did in the last match. LUNCH REPORT

Earlier England started from 310 for 6 on Day 2. Ali was dropped early on in the day, so was Woakes. Ali completed his 1,000 Test runs. After that Woakes and Broad got out in a hurry. Ali took the matter into his own hands and started scoring at run a ball, barely giving any strike to Steven Finn after Lunch. He reached to his second hundred in no time. After that he launched a brutal onslaught on Sri Lanka’s bowlers. He backed himself to hit boundaries and worked the ball into big gaps between fielders to pick up twos to keep strike. READ: Moeen Ali reaches 1,000 Test runs

Herath finally took his 300th  wicket after bowling 29 overs in the match. He removed Finn who was trying to slog the ball against the spin. At the other end Ali kept hitting boundaries and went on to score 150 in no time. Alastair Cook declared England’s innings at 498 for 9. Ali remained not out at 155, his career best innings. 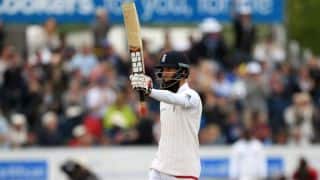