Kumar Sangakkara and Mahela Jayawardene were not out at Tea.

Sri Lanka head to Tea at a comfortable 99 for two. Openers Dimuth Karunaratne and Kaushal Silva were the men dismissed, but a very solid looking Kumar Sangakkara and Mahela Jayawardene were at the crease with the Lankans trailing by just nine runs.

James Anderson started things off after lunch, and caused Karunaratne some problems right away. Chris Jordan continued for what would prove to be a longish seven-over spell. Liam Plunkett started things off with a short, quick ball that passed inches from Kaushal Silva’s face. There was an LBW appeal against Silva which was turned down. The Englishmen went for a review, but it was going down the leg stump.

Plunkett continued to look very good, as Silva poked at one which Matt Prior accepted gleefully. Plunkett struck again soon before Tea, getting Karunaratne out caught behind. Mahela Jayawardene was the new batsman. Between the experienced Sri Lankan duo, they held off the English attack till the Tea break.

Chris Jordan and Stuart Broad were largely unpenetrative, while James Anderson didn’t bowl as much as he could have. Only Plunkett looked dangerous, and his two wickets were testimony to that. Sri Lanka will be hoping that their two stalwarts can kick on in the final session and swell the lead. England, on the other hand, will be hoping they can bundle out the visitors soon, and chase a manageable score. 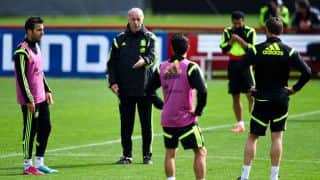 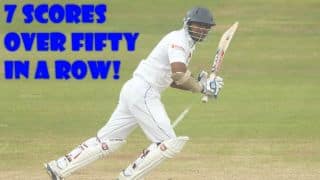