Angelo Mathews, Dinesh Chandimal's 181-run partnership revived Sri Lanka, as the visitors put up 270 for 4, trailing by 266 runs against India before tea, Day Three of the third Test.

Angelo Mathews, Dinesh Chandimal‘s 181-run partnership revived Sri Lanka, as the visitors put up 270 for 4, trailing by 266 runs against India before tea, Day Three of the third Test. Mathews scored his eighth Test career century during the second session but could not extend his stay for much longer, removed for 111 by Ravichandran Ashwin. At the crease now are skipper Dinesh Chandimal (98*) and Sadera Samarawickrama (4*).

Sri Lanka lost two early wickets before Chandimal and Mathews put up the biggest partnership for Sri Lankans in the series. They managed not to lose any wicket in the first session, adding 61 runs. However, India kept producing half-chances, putting the batsmen under pressure. They stopped singles, which in turn frustrated the batsmen. Mathews lived dangerous, being dropped twice in his nervous nineties. He was finally undone by Ashwin off a delivery which did not turn much. Mathews played for the turn and edged it to Wriddhiman Saha for a good catch.

Chandimal, who provided Mathews ample support to complete his hundred, is now 2 runs away from his own century. Along with him is Samarawickrama, who was struck by the ball while fielding and got the clearance to bat on Monday. Sri Lanka scored 78 runs in the session, losing the wicket of Mathews. 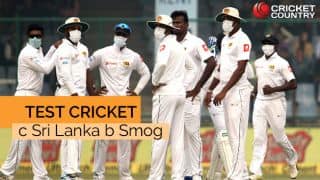