Sri Lanka lost two wickets in quick succession as Pakistan gained command in their first Test at Galle. Kithuruwan Vithanage and Niroshan Dickwella were dismissedby Saeed Ajmal, who made a strong comeback in the match after being belted by the Sri Lankan batsmen.

Earlier at tea, Kumar Sangakkara was unbeaten on 189 while Angelo Mathews fell after scoring 91, as Sri Lanka reached 449 for four against Pakistan at tea on Day Four at Galle in the first Test match. Pakistan lead by just two runs in the first innings.

Mathews was dismissed by Saeed Ajmal close to the tea break, as the Sri Lankan batsmen continued to dominate the Pakistanis with splendid batting display at Galle. Mathews and Sangakkara added 181 runs for the fourth wicket, which helped their side to inch close to Pakistan’s first innings total. 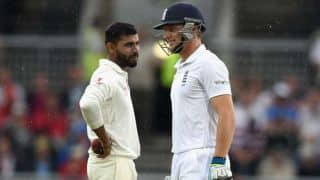