Dream11 Team Prediction Sri Lanka Under-23 and Bangladesh Under-23 Final Match South Asian Games 2019 – Cricket Tips For Today’s Match SL-U23 vs BD-U23 at Kirtipur: In the final South Asian Games 2019, a strong Sri Lanka Under-23 team will take on a well-balanced Bangladesh Under-23 team at the Tribhuvan University International Cricket Ground, Kirtipur on Monday. Before the start of the cricket schedule in the ongoing South Asian Games, there were two teams who were touted to compete for the gold medal in cricket. Living up to their reputation both Bangladesh U23 and Sri Lanka U23 fully reposed the faith of their fans and experts by playing some fabulous cricket. The two teams will play for the Gold on Monday to decide Asian supremacy. In their last league encounter, Sri Lanka handed Bangladesh a mauling by nine wickets as opener P Nissanka and L Croospulle scored match-winning fifties.

Before their last league game – Bangladesh have earlier defeated Nepal by 44 runs, a match which saw them restrict their opponents to just 111 after piling of 155 on the scoreboard while batting first. Elsewhere, Sri Lanka handed down a battering to Bhutan as they cantered their way to a colossal 173 run win, a win which saw them outplay their opponents with both the bat and ball.

TOSS – The toss between Sri Lanka Under-23 and Bangladesh Under-23 will take place at 12 PM (IST). 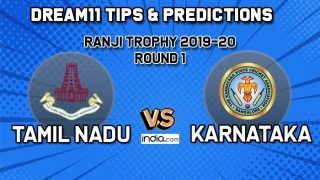