Seeing as he is eligible to play until the results of tests on his action are out, the hosts have backed him to succeed.

Akila Dananjaya has been confirmed to play the second Test versus England at Pallekele, with Sri Lanka s stand-in captain Suranga Lakmal stating that the management has decided to give him a chance to sort out his action in a live match.

Dhananjaya s action has been called into question, but seeing as he is eligible to play until the results of tests are out, the hosts have backed him to succeed.

There are no rules from the ICC saying he cannot play he can still play and he s in a good mentality, so he will still play the next match and correct his mistake, said Lakmal. “I talked to him and said don’t worry about anything – just focus on this game. I’m sure he will get cleared for the next match. He’s bowled well in the past and he has to do that again. Getting reported is just another thing. Forget that and bowl well in this game.”

Sri Lanka will be without the retired Rangana Herath, who bowed out with 433 Test wickets, and regular captain Dinesh Chandimal who suffered a groin staring during the Galle Test. 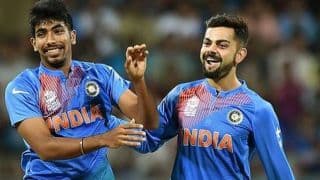