Sri Lanka vs Australia 2016, 3rd ODI at Dambulla, Preview and Predictions: Hosts aim for another win and claim the lead

Sri Lanka vs Australia 2016, 3rd ODI at Dambulla, Preview and Predictions: Hosts aim for another win and c

Sri Lanka will look to come up with a similar match-winning performance, when they take on the Australian team in the third ODI at Dambulla.

Following a commendable 82-run win over the reigning world champions, hosts Sri Lanka will look to come up with a similar match-winning performance, when they take on the visiting Australian team in the third of the five-match One-Day International (ODI) series at the Rangiri Dambulla International Stadium, in Dambulla on Sunday. Sri Lanka, who were mauled in the opening ODI, held their nerve to bounce back, and level terms against the Australian, by beating them by 82 runs, and a win on Sunday would help them gain the lead over the world champions, as well as put them in the driver’s seat. FULL CRICKET SCOECARD: Sri Lanka vs Australia 2016, 3rd ODI at Dambulla

Considering the performance of the teams in the previous tie, Sri Lankan batsmen sparkled with the bat, as it was three half-centuries from Kusal Mendis (69), skipper Angelo Mathews (57), and Kusal Perera (54), along with a decent knock of 48 from wicketkeeper-batsman Dinesh Chandimal, which allowed Sri Lanka to post a match-winning total of 288 in 48.5 overs. As for their bowling, it was spinner Amila Aponos, who claimed four for 18, while Thisara Perera claimed three for 33, that indeed broke the backbone of the Australian batting, as Sri Lanka easily cruised towards a win.

As for Australia, it was a good display with the ball, especially from three bowlers in the form of Mitchell Starc (3-53), James Faulkner (3-45), as he also became the 41st man in ODI history to claim a hat-trick, and Adam Zampa (3-42). As for their batting, they eventually failed to fire and stumbled to the fierce bowling attack from the Lankans. It was only their wicketkeeper-batsman Matthew Wade, who played a steady knock of 76, while skipper Steven Smith scored 30, and Travis Head scored 31. SL vs AUS: Tillakaratne Dilshan heaped with praise ahead of his retirement

Therefore, going by the performance of the previous tie, changes are likely for the visiting Australian side, as all-rounder Moises Henrqiues could face the axe, and could well be replaced by Josh Hazlewood as the extra pacer, while Aaron Finch could also face the axe, and could bring in Usman Khawaja as the opener. Also, with Smith not playing, David Warner would be leading the side and would be interesting to see whom he replaces him with, as Shaun Marsh seems to be the top contender to do so. As for the bowling, the changes are unlikely, as they did perform as a unit.

As for the hosts Sri Lanka, changes are unlikely. However, a couple of changes cannot be ruled out either, as Danushka Gunathilaka could be replaced by Angelo Perera, while Dhananjaya de Silva too could make way for Avishka Fernando or Lakshan Sandakan. In the bowling, Seekkuge Prasanna could be on the receiving end, and could be replaced by Suranga Lakma, while Dilruwan Perera could also be replaced by Milinda Siriwardana. Ranatunga unhappy with Sri Lanka’s over-dependency on spin

Ahead of the game at Damubulla, both the captains said that the wickets have indeed been challenging in this series, and batting second has been a tough task, as both the teams look to perform, especially with the bat, regardless of the side they come up with and field for the match. As for Australian coach Darren Lehmann, he said that he wants his prayers to find solutions, despite of the challenges coming ahead in the series.

Earlier, Mathews had all praise for Ksual Mendis, following the 2nd ODI win over the Aussies. “He’s going to be a big player for us. He’s going to be the future of our batting. If he keeps going like this he will do wonders for the Sri Lanka team and I wish him all the very best. It was a fantastic knock today,” Mathews told espncricinfo.com. Lehmann backs Cricket Australia’s decision to rest Smith for rest of Sri Lanka series

“He’s just very positive. Especially after losing a couple of wickets in quick succession, the way he went out there and the way he batted was brilliant. Not too many people do that – you take a bit of time and settle in and take a look at the wicket. But he’s just going out there and playing with a lot of freedom. He’s just a different kind of player,” Mathews added.

Mathews also praised Aponso for his terrific spin bowling. “Not all the spinners bowled very well out there, apart from Amila Aponso – in the first game as well as this game. He’s bowled in these two matches like he’s played internationals for a long time. He’s just landing it on the spot and keeping it pretty simple – just bowling it there and letting the ball do the rest. He’s been turning a few and sliding a few. It’s been extremely difficult for the batters,” said Mathews.

Mathews also added a few world of praise for Chandimal, who has been in good form since the Test series. “Chandimal’s been tremendous for us in the Test series and also in England. He’s matured. He’s also playing with a lot of responsibility – as a senior. He’s anchoring the innings and that’s what we want from him. Him batting at No. 4, we want him to bat until the 46th over, so that guys like Kusal Mendis, Kusal Perera and Danushka Gunathilaka can go out there and play with a lot of freedom. In our batting line up myself and Chandimal have to take the responsibility to let the youngsters play with freedom,” said Mathews.

Speaking on Dilshan’s failure to perform and if he would be dropped, he quickly said, “No matter how experienced you are, it doesn’t mean you will play well all the time. You can get unlucky and get out. I got out cheaply in the last game as well. Though Dilshan failed in this match, others played well and won it. We trust that he will play well in the future.” 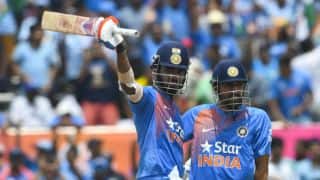