Sri Lanka are currently leading the ODI series by 2-1

Australia won the third ODI against hosts Sri Lanka by 2 wickets with 24 balls to spare. Tillkaratne Dilshan could not get a proper send-off. He got out after scoring 42 as Sri Lankan side were heavily dominated by David Warner led Australia. Sri Lanka tried another opener Danushka Gunathalika who fell victim to in-form bowler Mitchell Starc. However, Dinesh Chandimal rescued Sri Lanka as he scored a century despite wickets falling from other end. Even Sri Lankan batting sensation Kusal Mendis fell early adding to the batting woes. The hosts bundled out with 4 balls to spare. ALSO READ: Sri Lanka vs Australia 3rd ODI Video highlights

Half-centurion George Bailey starred in Australia’s tense run chase as the visitors edged past Sri Lanka by two wickets in the third one-day international and took a 2-1 lead in Dambulla on Sunday. Australia chased down 227 in 46 overs to deny Sri Lankan batsman Tillakaratne Dilshan a winning farewell in his final ODI. Bowlers set up the win for the visitors after restricting Sri Lanka to 226 all out in 49.2 overs with Dinesh Chandimal top-scoring with 102. ALSO READ: Tillakaratne Dilshan reveals details about his captaincy period post retirement

The Sri Lankan bowlers also made their presence felt with skipper Angelo Mathews providing the hosts with two early wickets including that of his opposite number David Warner. “It’s always good to start on a winning note and go 2-1 up. I think our bowlers bowled really well in the middle overs – Zampa and Hastings,” said Warner. Mathews got Warner caught at point for 10 as Dilshan took a splendid catch.

Aaron Finch, who scored a 29-ball 30 with three fours and a six, was next to go after left-arm spinner Amila Aponso trapped the opening batsman lbw. Mathews struck again with his medium-pace to get Shaun Marsh, who was included in the XI in place of resting Steve Smith, out for one and put the visitors in trouble at 44 for three. Travis Head and Bailey, who scored a gritty 70, put on 62 runs for the fourth wicket to put the tourists’ chase back on track as the duo scored runs at a decent pace.

Off-spinner Dilruwan Perera bowled Head for 36 as batting suddenly seemed difficult under lights at the Rajgiri Dambulla International Stadium. Bailey, whose 142-ball stay was laced with five boundaries, held fort as he got Matthew Wade for company and the batsmen put on 81 for the fourth wicket to keep the visitors in sight of their target.

Man of the match Bailey posted his 20th ODI fifty as he mixed the right dose of caution and aggression, forcing the Sri Lankan think-tank to rotate their bowling options. Dilruwan Perera finally got Wade stumped for 42 to break the dangerous stand and bring alive the packed home crowd. Soon leg-spinner Seekkuge Prasanna got Bailey bowled in the 42nd over with Australia needing another 23 runs for victory.

A wobbling Australia lost another two wickets before Adam Zampa got the winning runs as he got the ball sailing over extra cover where Dilruwan Perera dropped the catch to the delight of the visiting players. Mathews, Aponso and Dilruwan Perera took two wickets each. Earlier Sri Lanka, who elected to bat first, suffered from regular fall of wickets against a persistent Australian attack led by leg-spinner Zampa. The hosts lost two early wickets before Dilshan and Chandimal put together a 73-run partnership for the third wicket to steady the innings.

The 39-year-old Dilshan, who played his last ODI of his glittering career, scored a 65-ball 42 with the help of five boundaries before falling to Zampa. Dilshan, who recorded 10,290 runs in 330 ODIs with 22 hundreds and 47 half-centuries, acknowledged the cheers of a raucous home crowd as he walked back to the pavilion. “I think it’s the right decision, the way I finished my career. I’m really happy I contributed in all three departments. I’m really happy with my decision,” Dilshan said after the game.

Zampa, who returned with impressive figures of 3-38, got another wicket in his next over as he trapped Mathews lbw for two. Chandimal, who has recorded five half-centuries and a ton in the last seven ODI innings, registered his fourth ODI century in his 117th match to keep the hosts in the hunt after they were reduced to 178 for eight. Chandimal found the perfect partner in Perera, who made 17 off 21 balls, as the duo put together a crucial 39-run ninth wicket partnership to give the Sri Lankan total some respect.

Medium-pacers Starc, Faulkner and John Hastings took two each to back up Zampa’s efforts. “We were about 20-30 runs short. We have so many bowlers who can bat but we didn’t have anyone partnering Chandimal,” said Mathews. The fourth ODI of the five-match series is scheduled for August 31 at the same venue. Will the cricket world care to play with Afghanistan or Bangladesh? 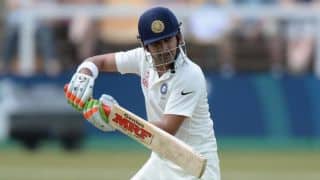