Australia trail by 214 runs with nine wickets in hand, going into Day Three of the third Test against Sri Lanka.

Australia resume Day Three of the third and final Test against Sri Lanka at 141 for 1, still trailing by 214 runs with nine wickets in hand. Catch the live telecast of the match on Ten Sports 1 HD & Ten 3. The live streaming is available on Ten Sports Live and tensports.com. Shaun Marsh and skipper Steven Smith are the two unbeaten batsmen for Australia. They have already put on 120 for the second wicket after losing David Warner early in the innings. Marsh, playing his first match of the series is batting on 64, while Smith is batting on 61. LIVE CRICKET SCORECARD: Sri Lanka vs Australia, 3rd Test at Colombo

Sri Lanka were earlier bowled out for 355. Dhananjaya de Silva scored his maiden Test along with Dinesh Chandimal, who top-scored with 132. The dup put on 211 for the sixth wicket after Sri Lanka were reduced to 26 for 5 at one stage. Their partnership has given Sri Lanka some hope in this match. The bowlers on the other hand have not had it as easy as they did in the first two matches of the series. De Silva, who bowls part-time off-spinners did manage to get the wicket of Warner early, but Sri Lanka did not have any luck after that. LIVE CRICKET UPDATES: Sri Lanka vs Australia,3rd Test at Colombo

Rangana Herath, Dilruwan Perera and Lakshan Sandakan have tried their best to get a breakthrough, but they have failed. They will look to get a couple of quick wickets in the first session and look to put the opposition on the back foot early on. Marsh, who has an average of over 80 in the subcontinent wil look to make this a big innings and help Australia avoid the whitewash. 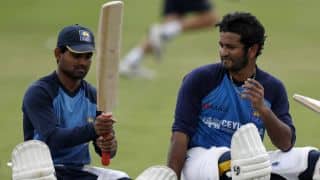