Darren Lehmann has insisted on the factor that Steven Smith needs to freshen up ahead of the hectic summer schedule lined up for Australia paving way for David Warner to prove his leadership skills.

While there are different opinions on sending Australia captain Steven Smith soon back to Australia mid-way of the series against Sri Lanka, coach Darren Lehmann has defended the decision to send Smith back home. He has insisted on the factor that Smith needs to freshen up ahead of the hectic summer schedule lined up for Australia. That paves the way for David Warner to prove his leadership skills in limited-over cricket. Smith headed to Colombo airport this morning, meanwhile his teammates were heading to Dambulla for their third and fourth One-Day International (ODI) that will take place on Sunday and Wednesday. FULL CRICKET SCORECARD: Sri Lanka vs Australia 2016, 2nd ODI at Colombo

Lehmann confirmed that discussions about the captain prematurely departing the 10-week Qantas Tour of Sri Lanka had pre-dated the Test series, which finished earlier this month with a 3-0 whitewash victory to the host nation. Cricketers like Michael Clarke and Mahela Jayawardene criticised the decision, the selection panel stood firm on their decision. Speaking to cricket.com.au, Lehmann said, “We respect our former captains and former greats who have an opinion. There’s no drama, they’re entitled to that. But we think it’s the best thing for Steven to get him right and ready to go. We planned that for a long time and he (Smith) took some convincing, there’s no doubt about that.”

He further added, “ But as a coach and a selection panel we’re making sure he’s fresh and ready to go each and every time he plays for Australia. We just wanted to make sure that he’s fresh and ready to go for South Africa and then the big summer ahead. It was well planned and well thought out, and that’s what we’re doing.” This decision has given immense chance deputy Warner to lead Auatralia in a series that remains balanced and in most demanding f conditions. ALSO READ: Glenn Maxwell gets call up for T20I series against Sri Lanka

Warner’s captaincy has been restricted to Indian Premier League (IPL) franchise Sunrisers Hyderabad (SRH) and Big Bash League (BBL) franchise Sydney Thunder’s for one match. Lehmann mentioned, “If Steven happened to get injured then we need David to have some experience. So that’s another opportunity and that’s important for us to get him that experience. They’re a great leadership duo together and David’s been exceptional over the last couple of years, coming through some difficult times and now playing really well. Obviously we’d like him to make a few more runs in this tour but having said that, with the leadership he did really well with the IPL side (Sunrisers Hyderabad) so we’re confident he’ll do a good job for us.” ALSO READ: Smith rested for remainder of SL tour; Warner to lead AUS

Although there is plenty of burden on the 27-year-old, Smith wants to continue leading his side in all three-formats. Former Test captain Steve Waugh recently expressed his view that the mental pressure that accompanied international captaincy was a reason that many Test-playing nations including England, India and South Africa share the leadership responsibilities across the different formats.

Lehmann has reaffirmed that Smith who was elevated as the captain of Twenty20 (T20) wants him to continue the stance apart from ODIs and Tests. Lehmann ended the conversation saying, “He wants to keep doing and we’re very happy with the way that he’s leading the side. Obviously with results, we’d like a few more wins here in Sri Lanka. But from our point of view it’s a case of making sure that he’s fresh and ready to go for each tournament that comes up.” 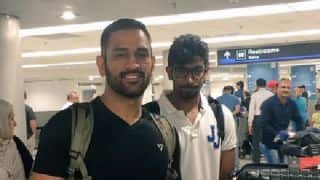 Shikhar Dhawan and other cricketers wish their fans 'Happy Janmashtami'