David Warner, the stand-in captain during Smith's absence, has said that looking at Smith's current stature as one of the best players in the world, he deserves a break amidst the hectic schedule

There has been much criticism about Cricket Australia resting Steven Smith for the remainder of Sri Lanka tour of Australia. However, Smith’s own teammates and even the dominating opposition have no issues with this. Recently, David Warner, the stand-in captain during Smith’s absence, has said that looking at Smith’s current stature as one of the best players in the world, he deserves a break amidst the hectic schedule that he is going through. Australia had a very poor run in the Test series in Sri Lanka as they lost it 3-0 to the hosts but have put up a better performance in the One-Day International (ODI) series as the five-match series is squared 1-1 so far. FULL CRICKET SCORECARD: Australia vs Sri Lanka 3rd ODI at Dambulla

Talking to espncricinfo.com, Warner said, “I can feel for Steve and the amount of cricket he has been playing. It is going to very, very tough with the scheduling these days to play all three forms and every single game possible. Players are getting rested here and there. Everyone has to adapt, and we’ve got [to remember] that everyone is human.

“The stats he has on the board, runs-wise and the world’s best batter and player, I think he deserves a break whether or not it was during the series or before the series. There were times there when I may have been leaning towards having a break and then you have a bit of misfortune by getting injured and that has sort of been my freshen-up.”

Opposition captain Angelo Mathews also chose not to create any more controversies and said he and his team have no issues with the sudden decision.

“I think they have their own player management system, but honestly, if it was me, I wouldn’t have [left], because it’s a tough tour. You need the captain alongside the playing XI. They decided to rest him – well, I don’t think we as players have any issues with that,” Mathews said. 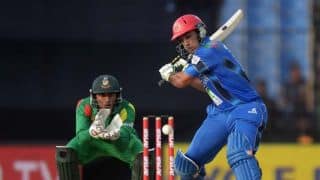