England lost their second ODI against Sri Lanka by eight-wicket on Saturday, taking their tally to 15 defeats in their previous 22 completed one-dayers against Test playing nations.

Sacked England batsman Kevin Pietersen has asked Cook to step down as captain if he cares about team’s chances of victory in winter and supported Alex Hales to take over instead, the BBC reported.

In response, Cook stated that people are entitled to their view, adding that that is the nature of the beast when sitting outside. He further said that they have got to stay strong as a group and they have the guys who have the opportunity to put up strong performances.

England trails the seven-match series 2-0 against Sri Lanka. Cook scored only 22 as England were bowled out for 185 in Colombo.

While cook stated that he has to keep on believing himself by doing his basics right, former England captain Michael Vaughan said that there is still time to make alterations. 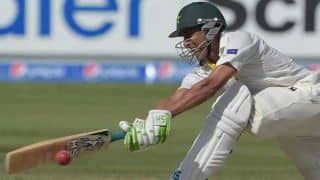