Sri Lanka reached 51 for one after 13 overs. The host had a poor start as they lose experienced Mahela Jayawardene early. Jayawardene, who came out to open the innings got a good ball from Chris Woakes in the fourth over of the match. After that Tillakaratne Dilshan and Kumar Sangakkara took charge of the innings.

England skipper Alasteir Cook first introduced spin in the 11th over of the game, but the blower, Moeen Ali was removed from the attack after bowling just one over. James Tradewell was asked to ball from the other end.

Sri Lanka won an important toss and decided to bat first on a hot and sunny morning at Pallekele. Sri Lanka are currently leading the seven match series 3-2 and an win in this game will seal the series for them. They made three changes as Dinesh Chandimal, Seekkuge Prasanna, and Suranga Lakmal came in for Ajantha Mendis, Kusal Perera and Dhammika Prasad. 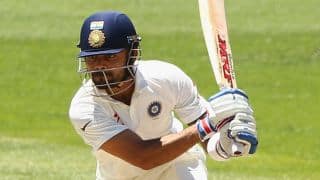