Herath who led both teams off the field in Galle on Friday as he ended his international career with 433 Test wickets to his name.

The retiring Rangana Herath was run out in his final international innings, the last Sri Lankan wicket to fall on day four of the Galle Test to hand England victory by 211 runs.

It was England s first away Test win since October 2016, but it was Herath who led both teams off the field at the Galle International Stadium on Friday as he ended his international career with 433 Test wickets to his name.

“Losing is never a good result for any team but hopefully the guys will come back strongly for the next two Tests, the 4o-year-old told Sky Sports moments after the loss. “I am in an emotional situation. Everyone has to take a decision at the right time and I am thankful for all those years that I have played.

“I will miss it, of course. I may play some first-class cricket but we will see how it goes. I need to chat with work! I am happy with the talent that we have, we have a winning mindset.”

“It’s a bit of an emotional situation but everyone has to take a decision at the right time so I’m thankful for all the years that I’ve played and all the people who were behind me, especially my teammates and Sri Lanka Cricket. I must thank every single person who was behind me.

“It’s a been a privilege and an honour to play for my country. We have 22 million people in Sri Lanka so very few people get these opportunities and that is a remarkable achievement and an honour for any player. I’m so proud to have played for Sri Lanka and especially in this team.”

Dinesh Chandimal, Sri Lanka’s captain, said of Herath’s retirement: “We all know how much Rangana has contributed to Sri Lankan cricket. I would like to say sorry to him that we couldn’t win the game. Wish him well for the future. He was a tremendous human being. We have a small gift to him on behalf of the team.” 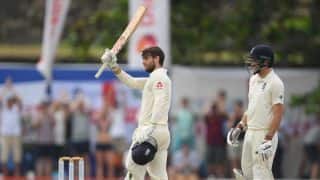