Sri Lanka vs England ICC Cricket World Cup 2015, Pool A Match 22 at Wellington, Preview: Chance for both teams to consolidate

Both sides have gained victories against lowly-ranked sides in the Pool A so far.

Sri Lanka take on England in the Pool A match at Wellington as both the teams  look to carry their momentum from their previous victories into the match on Sunday. England are coming off the back of a win against Scotland and Sri Lanka have managed to get two successive victories— a closely fought match against Afghanistan and a comfortable win against Bangladesh. ICC Cricket World Cup 2015: POINTS TABLE

Sri Lanka go into this match with a slight advantage as they have two points more than their opponents and in a way, it becomes more crucial for England to win. A win for Sri Lanka will put them well in contention for the quarter-final berth and England might struggle to make to make it into the knockout stages. But a win against Scotland in the previous game have give England a major boost ahead of their tie the subcontinent giants.  ICC Cricket World Cup 2015: Pool-wise Team Standings

England have had a mediocre beginning to the ICC Cricket World Cup 2015. They haven’t performed collectively as a team due to which they could not put up a fight against Australia or New Zealand. The match against Scotland probably came in at the right time for them as the Scots’ inexperienced side could not contain the English batsmen and neither did they offer much resistance while batting as England registered a 119-run win. Sri Lanka on the other hand began slowly as they lost their opening match to New Zealand and have grown in confidence ever since and have registered back-to-back wins now.  ICC Cricket World Cup 2015: SCHEDULE & MATCH DETAILS

England must not get carried away from their win against Scotland and look to get their act together as Sri Lanka will prove to be much tougher opponent than them. They’ll have to learn from the mistakes they made in the first two games and that into action against Sri Lanka. Every player has to lift their game a notch to have a chance of winning. Top 10 batsmen in ICC Cricket World Cup 2015

As far as Sri Lanka are concerned, all their main players seem to be in good nick. Tillakaratne Dilshan and Kumar Sangakkara struck unbeaten hundreds in the previous game against Bangladesh and Mahela Jayawardene  scored a match-winning century against Afghanistan. Sri Lanka also will be delighted with the way their star bowler Lasith Malinga bowled en route to his three-wicket haul. Everything looks to be clicking for Sri Lanka at the moment and it will be foolish of them if they don’t cash in on this. Top 10 batsmen in ICC Cricket World Cup 2015

It’s set to be a tense contest with a lot at stake. Both teams will want the day with two important points in their kitty, which is all that matters eventually!  Top 10 bowlers in ICC Cricket World Cup 2015 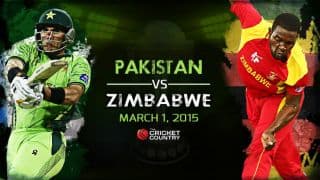