He was later dismissed in the 36th over by Trent Boult when Sri Lanka were 211 for three after 35.5 overs.

Sri Lanka opener Tillakaratne Dilshan got to his 20th One-Day International (ODI) century in the fifth ODI played against New Zealand at Dunedin. Dilshan was off to a slow start early on as he was facing a lot of dot balls but he slowly got off from his silent zone and started playing his natural strokes. He got to his century off 95 balls which also propelled Sri Lanka to a likeable position to chase down the total. He was later dismissed in the 36th over by Trent Boult when Sri Lanka were 211 for three after 35.5 overs.

Earlier, Luke Ronchi and Grant Elliot smashed their maiden and second ODI centuries respectively to stitch together a mammoth 267-run stand for the sixth wicket to help New Zealand finish on a total of 360 for the loss of five wickets, smashing several records along the way. While Ronchi ended up registering the highest individual score by a New Zealand batsman, smashing 170 runs off 99 deliveries, the 267-run stand turned out to be the highest-ever in ODI cricket for the sixth wicket. 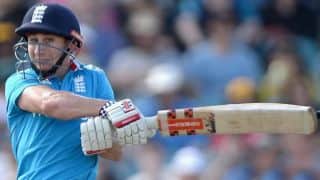