Sri Lanka vs New Zealand, SL vs NZ 1st T20I, LIVE streaming: Teams, time in IST and where to watch on TV a

Overs 19.3: It’s over! New Zealand have chased down 175 with five wickets remaining to take 1-0 lead in the three-match series.

Over 18: A good over for New Zealand – 13 runs from it including a six to Mitchell Santner. They need 18 off 12 deliveries now.

Rain stops. Ground is ready and play is about to get underway 37

And the players rush back to the dressing room as it’s raining. Covers are back on!

Over 16.5: OUT! Wanidu Hasaranga has trapped Ross Taylor lbw on 48. Taylor calls for DRS but the decision is upheld. He will have to go back. New Zealand 144/5, chasing 175

Over 13.3: OUT! The captain brings himself in and makes an impact. Lasith Malinga has the dangerman Colin de Grandhomme bowled on 44. The dismissal also makes him the leading wicket-taker in T20I history.

Over 10: New Zealand are 62/3 after consuming half of their allotted overs. They need 113 from the remaining 10 overs. Colin  de Grandhomme and Ross Taylor are the two unbeaten batsmen for the tourists.

Over 7.2: OUT! Debutant Wanidu Hasaranga strikes with his second delivery of the match as he has Tim Seifert out caught behind on 15.  Score 35/3, chasing 175

Over 6: End of Powerplay overs and New Zealand have made 36 for the loss of two wickets. They need 139 runs to win in 14 overs now.

Over 3.2: Martin Guptill goes big but doesn’t get the distance and is caught in the deep by Shanaka off Akila Dananjaya. NZ have lost both their openers cheaply. Guptill scored 11. Score 18/2

Over 0.4: OUT! And Malinga strikes in the first over with the big wicket of Colin Munro for a first-ball duck. A perfect start for Sri Lanka. Score 1/1

Over 20: An outstanding finish to the innings from Sri Lanka as they plunder 23 runs from the final over, bowled by Seth Rance (0/58). Sri Lanka 174/4

Over 16.1: OUT! Tim Southee returns to end Kusal Mendis’ brilliant innings. It took an excellent catch from Martin Guptill in the deep to send back Mendis who struck 79 off 53. Score 131/3

Overs 15: A good over for Sri Lanka as they take 11 runs off Ish Sodhi including a boundary to Niroshan Dickwella. Score 114/2

Over 11.3: Kusal Mendis gets to his fifth T20I half-century with a boundary – took him 35 deliveries to reach there.

Over 10: So at the halfway stage, Sri Lanka are 73/2 with eight wickets remaining. How far will they go?

Over 9.1: Pressure gets to Avishka Fernando. Quite some time had passed since the last boundary and he steps out but misses as Mitchell Santner drags the length back to have him stumped on 10. Score 68/2

Spinners are in operation from both the ends now

Powerplay ends: Sri Lanka have made 50/1 in six overs after opting to bat first.

Over 5: Pretty even after five overs as New Zealand managed to break the dangerous opening stand. Score 44/1

Over 4.3: WICKET! New Zealand have struck early and it’s their captain Tim Southee who brings them much needed relief to break the opening stand that had started brightly. Kusal Perera holes out to mid-off on 11. Score 41/1

A loud cheer as the players enter the field. New Zealand team in their huddle. And out come the two Sri Lankan openers – Kusal Mendis and Kusal Perera. Tim Southee has the new ball.

Weather update: So the toss has been delayed due to rain. Stay with us for the latest news

Having drawn the two-match Test series 1-1, Sri Lanka and New Zealand will now face each other in the three-match Twenty20 international series, the first of which will be played on Sunday.

While New Zealand missed out on their maiden World Cup title in July this year, the team will now be setting their sights on another World Cup – 2020 ICC World T20 World Cup – as they play their first limited-overs game after the fifty-overs World Cup at the Pallekele International Cricket Stadium.

Although Kane Williamson won’t be around to lead the side along with Trent Boult, this is a chance for the youngsters in the New Zealand set up to stake claim into the team. Barring Tim Southee, who will be leading the side, Martin Guptill and Ross Taylor, the Blackcaps have a largely inexperienced squad at their disposal. 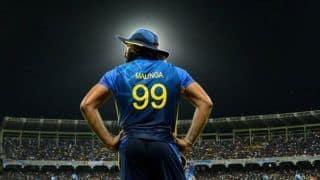 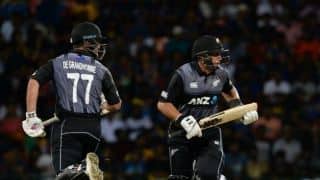